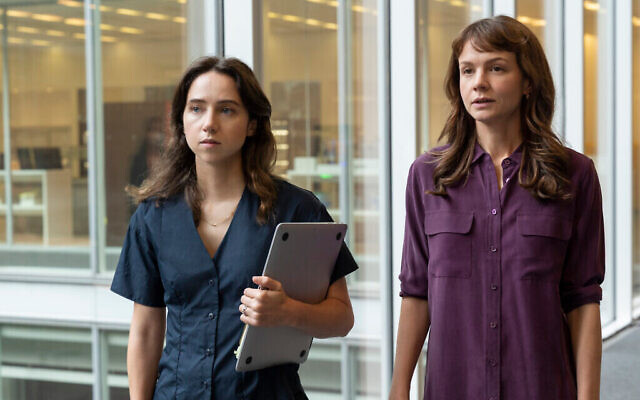 Although it’s always done a little bit tongue-in-cheek, whenever there’s a major news item some friends and I in a group chat deploy that cliché expression: “Is this good for the Jews?”

The Harvey Weinstein scandal, while it ultimately led to exposing a brutal power imbalance between men and women across all industries and, essentially, society in general, was definitely not, at first, good for the Jews.

But the new movie about how the story broke is.

She Said had its world premiere in October at the New York Film Festival and is now in cinemas.

If you are the gambling type, I’d call it a sure bet for some of next year’s top Academy Award nominations. (Part of that is because the movie is good, also because it is important, but let’s not count out that people still working in Hollywood may want to champion this film to point at the past and say, “See, we’re not like this anymore!”)

It follows a formula seen in All The President’s Men and Spotlight, in which pavement-pounding journalists do the tough and taxing work of getting a groundbreaking story into an important newspaper, and let the wheels of justice do the rest. 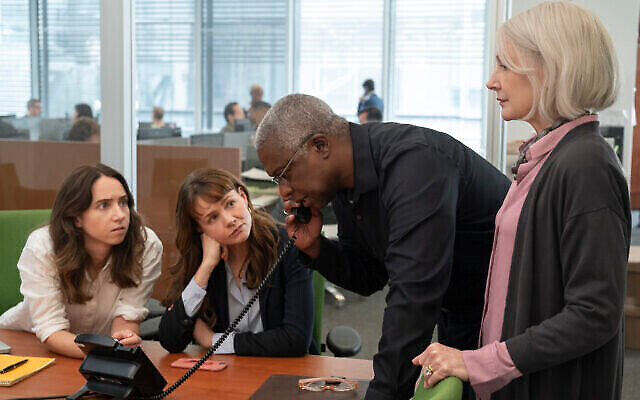 The film is based on the book of the same title by the two New York Times reporters who broke the story that led to the #MeToo movement in 2017, Jodi Kantor and Meghan Twohey, played by Zoe Kazan and Carey Mulligan. Their work proved that sexual harassment and abuse in Hollywood was not just a chuckle over “the casting couch” from days of yore, but a pervasive issue.

The initial focal point was the celebrated producer, Harvey Weinstein, a politically connected grand figure. But, as other stories followed, the ongoing discussion made plain what nearly everyone knew, but no one would say: that this was an issue pervasive in society, and could no longer be tolerated.

She Said is very much a partnership movie between Kantor and Twohey, with their editor Rebecca Mulligan (Patricia Clarkson) having their back. In key scenes, a very funny Andre Braugher swoops in as the paper’s executive editor Dean Baquet to have everyone’s back.

The movie zooms along, in pursuit of that next unearthed document or whistleblower ready to go on the record, but there’s room for important shading about our two lead characters, working mothers who know they are putting themselves at great personal risk by following this story.

Kantor’s Jewishness is not an unimportant aspect in her life, or in the film. The rare glimpses we see of this overtaxed woman enjoying downtime involve her lighting Shabbat candles. She speaks of how one of her contacts approached her “Jew to Jew,” a signal to cut through any preconceived attitudes and speak honestly.

And then there’s a key scene.

It’s next to impossible not to compare this movie to All The President’s Men — a dynamic duo of reporters, a story of the decade that led to a cultural awakening — and I think screenwriter Rebecca Lenkiewicz (whose work includes the brilliant Polish film Ida) and director Maria Schrader (of the Netflix series Unorthodox) decided to lean into it.

The movie positions one of The Weinstein Company’s accountants, Irwin Reiter, as Kantor’s Deep Throat. He can offer a key piece of corroborating evidence concerning payouts, which the reporters need to go forward with the story. Reiter is hesitant to speak, of course. He is certainly nuking his own career, let alone putting himself at legal risk, but, eventually, he does it because it is just.

Both reporters have scenes in which they have to convince other people to help. Kantor recognises in Reiter a Jewish person with whom she shares a bond. Summers in the mountains, a grandmother with a tattoo on her arm. Who knows how true to life this moment is (it’s a movie, after all, even if based on fact) but it packs a punch, and suggests that without this instance of bonding, the goal may not have been reached.

This may all sound very heavy, and indeed the stakes are high, but She Said is also a very entertaining film. Kazan is incredibly sympathetic as the just-above-water woman juggling so many things at once, and I can say with great authority that no one has eaten (or disposed of) an apple with as much force as Mulligan in this movie. The ending is as thrilling as any action-adventure picture, and it’s essentially a bunch of people standing around a computer proofreading copy.

The name “Weinstein,” like “Madoff” before him,” still makes me wince, but being totally honest I was greatly relieved to see Jewish characters working toward righteousness as part of this film. Rest assured my group chat will have much to discuss.