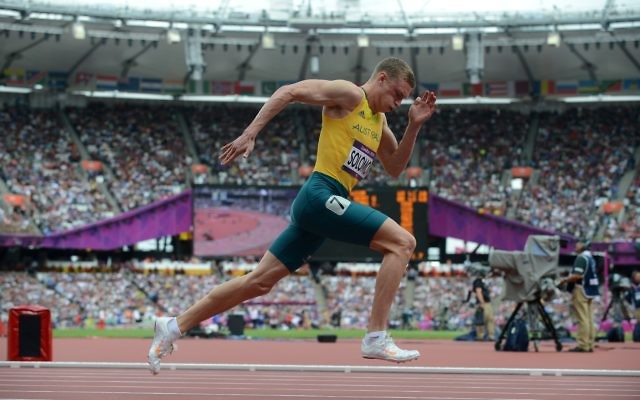 Australian athlete Steven Solomon competes during the 1st round of the Men's 400m at the Olympic Games in London, Saturday, Aug 4, 2012. (AAP Image/Dave Hunt) NO ARCHIVING

MACCABI Australia honoured the nation’s Jewish sports stars at functions held in Melbourne and Sydney earlier this week, with Jessica Fox (slalom canoe) and Steve Solomon (athletics) taking out the top gongs as most outstanding sportswoman and sportsman.

With the awards bestowed for achievements during 2014, Fox was a clear favourite. The 20-year-old from Penrith dominated her sport, becoming the first woman to win the K1/C1 double at a world championship, while recognised on home soil as the AIS Athlete of the Year.

“Thank you so much for this award and I’m sorry I can’t be there,” Fox said via a video link from her European training base.

“2015 is going to be a busy year with lots of competitions as I aim for an Olympics qualifying spot. There’s 547 days to go until Rio and I’m really training hard and loving every minute.”

Solomon is another worthy winner after a 2014 that saw the 20-year-old Sydneysider reach the Commonwealth Games 400m semifinal, break the Stanford 400m school record (45.36 seconds) and win his third Australian 400m Championship.

“Going into next year I’ll be doing my preparations for the Rio Olympics, but right now I’m just focusing on getting fit and healthy,” Solomon said, also via video, from Stanford in the US.

“I’d like to say a big thank you to my family, who have always been there to support me, as have Maccabi, right through juniors up until now.”

Montag, whose efforts in 2014 earned her a spot in the World Youth Championships this July, added the Outstanding Maccabi Junior Sportswoman to a growing list of silverware, while Victorian swimmer Jordan Hazan, 15, was distinguished in the respective male category and fellow swimmer Benno Negri, 16, received the Outstanding Junior Sportsman.

In the Masters category, hockey great Michael Balint (Vic) was acknowledged as the Outstanding Maccabi Sportsman after representing Australia at the Over-75 World Hockey Games, while the Outstanding Jewish Sportsman went to squash legend Dan Mossenson from Perth. Last year Mossenson won the Over-65 gold at the 2014 Pan Pacific Masters Squash Championships.

Marissa Ely was the recipient of Maccabi’s Outstanding Administrator of the Year, recognised for her tireless labors in taking the NSW Maccabi Basketball club from strength to strength.