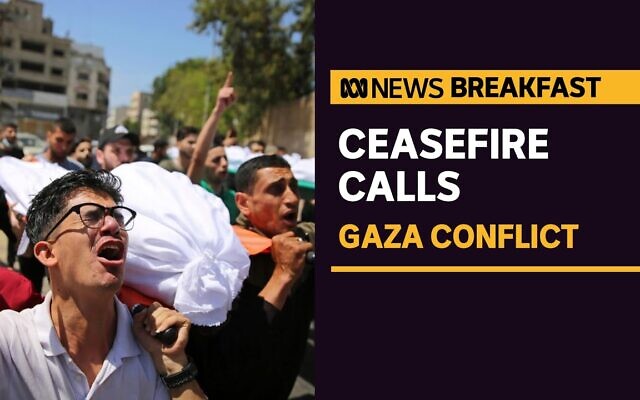 An ABC report on the recent conflict. Photo: Screenshot

IT’S been a while since the Australian Jewish community has been so profoundly concerned and so unsettled and upset about the ABC and its coverage of the Israel-Palestinian conflict.

Grievances, complaints and differences of opinion are an inherent component of any dynamic media outlet, an inevitable aspect of coverage of any contentious issue, particularly one which has deep-seated historical roots, contested claims and competing narratives.

That said, the avalanche of angst and outrage which followed the national broadcaster’s coverage of the latest hostilities between Israel and Hamas shook the community and continues to reverberate across all sectors, from representative organisations to the Friday night Shabbat table.

That is why the Executive Council of Australian Jewry (ECAJ) wrote a letter of complaint and sought a meeting with the ABC’s chairman and its managing director.

There were multiple triggers which caused us to write in detail to the ABC, most notably the hugely problematic Q&A episode of May 27, which took that program to one of the lowest depths in its history, characterised by its blatantly stacked anti-Israel panel, its refusal to include a Jewish communal representative on the panel despite the presence of strident anti-Israel voices, a skewed selection of tweets screened and failure by the moderator to intervene in response to false denunciations of Israel, including an allegation that it engages in terrorism.

In addition to instances of slanted headlines about the armed hostilities between Israel and Hamas, there was also the ABC’s so-called “Explainer” document about the outbreak of armed hostilities, which was replete with errors and skewed further by its selectivity. The piece should have been marked as an op-ed, and never presented on the ABC website as an authoritative and impartial analysis; it was neither.

We appreciated the ABC leadership’s rapid response to our letter of complaint and our request for a meeting, and also the candid and cordial discussion which took place.

However, the ECAJ’s meeting with the ABC was not simply aimed at getting an acknowledgement of errors or an apology, still less at giving the ABC a free pass or whitewashing its behaviour. It was about having the ABC agree to consider specific steps, some of which were suggested by the ABC itself, to overcome the underlying attitudes that so tarnished its approach, and which have repeatedly disenfranchised our community and disadvantaged Israel in the past.

Those constructive steps were confirmed in an ECAJ letter to the ABC the morning after the meeting. Our aim is to prevent these sorts of issues recurring regularly, and not merely to have complaints dealt with, however fairly, after the event – that is, after the damage has been done.

While the ECAJ left the meeting with a view that positive steps would be taken to address such issues, there has been no formal acknowledgement either from the broadcaster or its complaints unit, Audience & Consumer Affairs.

To the contrary, responding to numerous complaints from the public, the complaints unit astonishingly concluded in almost Orwellian fashion that a panel that was skewed 80-20 towards one side of the debate was sufficiently balanced: “… we are satisfied that a range of principal relevant perspectives were presented on the issue and that no one view was unduly favoured over any other.”

With that kind of response, the ABC complaints unit’s description of itself as “a unit which is separate to and independent of program making areas within the ABC” is decidedly unconvincing. From the outside, the organisation seems to be pervaded by groupthink.

By its flawed coverage and cavalier dismissal, in almost identical terms, of so many complaints, the ABC complaints unit has seriously compromised its professed independence.

Further, at least one ABC journalist covering the most recent conflict became an open activist for the Palestinian cause, including by endorsing pro-Palestinian rallies that used terms such as “Zionist ethnic cleansing” in their flyers.

For these reasons, as the ECAJ emphasised during the meeting our community feels betrayed by the ABC.

While this would be an important step forward, it would not be sufficient. The ABC also needs to overcome the deep-seated problems in the ABC’s news and current affairs coverage of the Middle East. In its letter to the ABC, the ECAJ attributed those problems to a pervasive culture of bias against Israel. The ABC denies that any such culture exists, but culture underpins the very corporate behaviour of which we complained, and senior management needs to act.

The ABC owes it to the public, including our community – and to itself – to get its house in order. That includes balanced panel discussions, informed moderators and journalists and a focus on fairness and accuracy.

Jillian Segal is president of ECAJ.