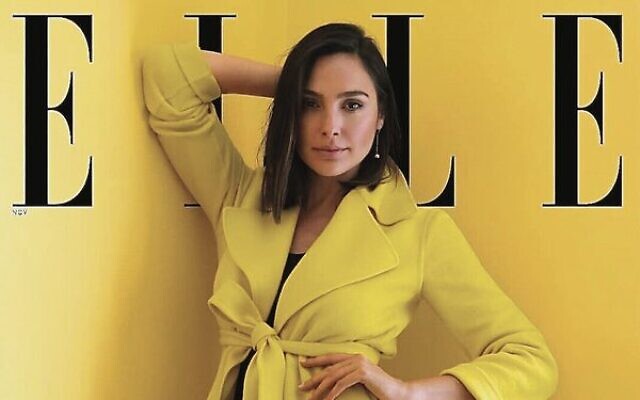 Gal Gadot on the front cover of the November 2021 issue of Elle magazine. Photo: Elle via Times of Israel

ISRAELI movie star Gal Gadot is on the front cover of the November issue of Elle magazine, which is dedicated to “Women in Hollywood”.

The worldwide lifestyle monthly said of Gadot that her “biggest superpower is her willingness to stand up – for herself and others.”

Others featured in the tribute to Hollywood women are Angelina Jolie, Gemma Chan, Lauren Ridloff, Salma Hayek, Jodie Comer, Halle Berry, Rita Moreno and Jennifer Hudson. Each has been given a separate cover.

“I am so excited to be a part of Elle’s 2021 women in Hollywood issue and honoured to be sharing it with such an amazing, inspiring group of women,” Gadot wrote in a Facebook post.

In an accompanying interview, Gadot spoke of her dedication to what Elle described as “righteousness, and rightness”.

She spoke of her reported clashes with director Joss Whedon on the set of his Justice League movie. The Hollywood Reporter reported in April 2021 that Whedon had threatened Gadot’s career when she complained about some of her lines and that he later bragged about putting her down.

“Oh, I was shaking trees as soon as it happened,” she said. “And I must say that the heads of Warner Brothers, they took care of it … Going back to the sense of righteousness that I have … you’re dizzy because you can’t believe this was just said to you. And if he says it to me, then obviously he says it to many other people. I just did what I felt like I had to do. And it was to tell people that it’s not okay.

“My sense of justice is very strong.”