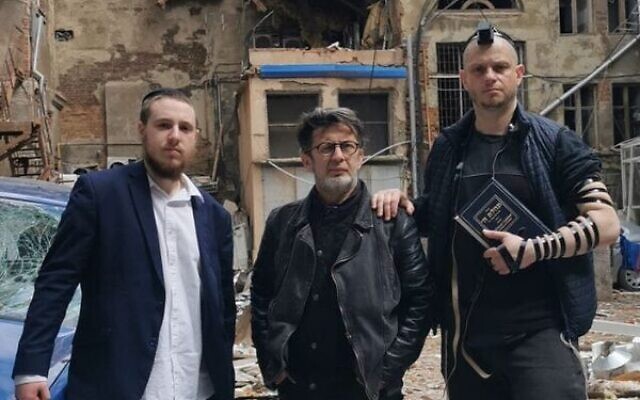 Members of the Jewish community in war-torn Kharkiv.

“I WAS sitting yesterday and looking at the Harbour Bridge and everybody just walking around like normal and thinking to myself, I can’t believe that on the other side of the world there are people being bombed at the same time,” Rebbetzin Miriam Moskovitz told The AJN last week.

Sydney-raised Moskovitz, who moved to Kharkiv, Ukraine (then part of the Soviet Union) in 1990, has been based in Israel since fleeing in March with her husband, Chabad of Kharkiv director Rabbi Moshe Moskovitz, and their children.

In Australia last week to visit family, the former Moriah College student told The AJN, “It’s hard to believe this is still going on.

“People are tired. It’s very sad to say that some people have just got used to it. Every night around 11.30, 12am the bombing starts. I call up in the morning, I speak to people, ‘how’s your night, I see that there was bombing’ and they’re, ‘yeah, like usual’.”

She said the onset of spring in the city has brought with it an abstract image.

“They’re planting flowers everywhere and the grass is green but on the other hand, you’ll have a building totally burned out, with no windows,” she said.

“There’s less people in the city, but the ones who are there just keep having a hope that somehow or other this is going to end. But as time wears on, [there’s] definitely a lot of fatigue, in a sad way actually just getting used to a norm which is really not a norm – you should not be hearing bombs every night and air raid sirens.”

Moskovitz recalled the war starting just one day after the community celebrated the 30th anniversary of the Jewish school in Kharkiv.

Between Thursday and Saturday, she said, “We were the whole time going to the synagogue, helping people, because straight away it became a humanitarian crisis where people were trapped in their homes. So we worked out ways to get food to people’s houses.

“Then on Sunday, the Russian tanks actually entered the city. There was shooting so everybody had to stay at home.”

When the tanks were forced out of the city, she said everyone thought that would be the end of the attack on Kharkiv.

“But the next morning they started aerial attacks and bombs,” she said.

“They bombed next to my house. There was a bomb nearby to our kindergarten which blew out all the windows and the doors. 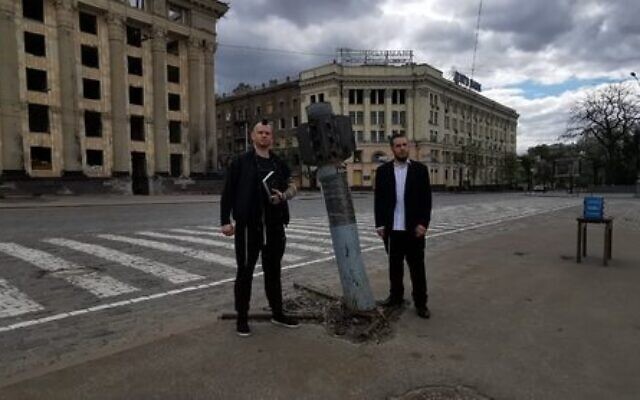 Members of the Jewish community in war-torn Kharkiv.

It was a 28-hour drive to Chisinau in Moldova, from where the family flew to Israel. There they have helped fellow Ukrainian refugees while continuing to aid their community back home.

“Our focus mainly now is humanitarian help,” she said.

Bread is baked in the synagogue and handed out in the city to Jews and non-Jews alike. Food and medicine are delivered to people’s homes. A Pesach seder was arranged for Jews who remained in the city.

For those who want to leave, there are buses. “In the beginning they were daily, you’re talking about hundreds of people leaving daily from the synagogue evacuating over the border. Now we have a few buses a week.

“It was just so important for everybody, it was extremely emotional for people, even my non-Jewish neighbours, everyone was running to him.”

She said she looks forward to being able to return herself.

“We’re going to go back and forth. We’ll keep looking at the situation – if it gets quieter, then I’ll also be able to go back. I also have little children, so the whole time we’re just watching for the first opportunity to be able to get back to our community,” she said.

Moskovitz said the Jewish community worldwide and in Australia “has done an amazing job” providing material, emotional and spiritual support.

Chabad of Kharkiv is continuing to accept donations which she said “goes straight to giving people food and medicine”.

“The synagogue is known in the whole city as a place that is giving humanitarian help and food to anybody who turns to them,” she said.

“We’re supposed to be the ‘light unto the nations’, to be out there helping everybody. I think here, everyone actually saw that’s actually what the Jewish community is doing. So that’s definitely very special.”

She said she still prays and hopes the “suffering and what everyone’s going through” will end as soon as possible.

To donate, please go to jewishkharkov.org/donate