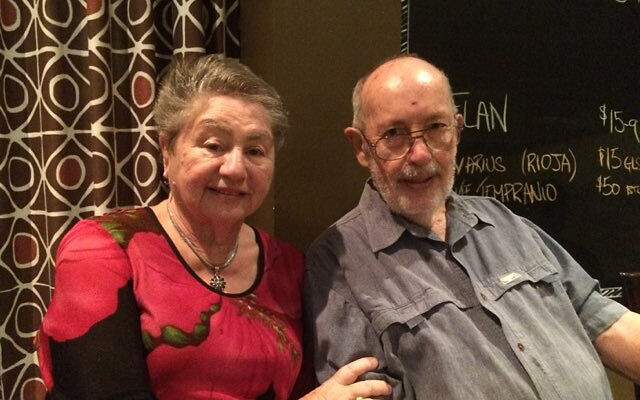 ON the morning of New Year’s Eve, Cecily and Roger Parris decided to take a 10-minute drive from their home in Conjola Park to Milton to the hairdresser. It would be the last time they would see their house.

“When I left the hairdresser I could see smoke coming from our area but I thought it could be anywhere,” 76-year-old Cecily told The AJN this week.

“And then we started to drive home but the police stopped us and said we couldn’t go any further because there was a fire in our area.”
After spending the night with friends, they returned to find complete devastation.

“It’s a shocking site because a fireball hit it.

“The top of the street looks as if a bomb went off with row upon row of burnt-out houses.

“Our neighbours’ houses, the three behind ours and our house have been completed demolished.”

Cecily said that while obviously their health and safety are paramount, as they didn’t have any notice they have lost irreplaceable items.

“We were only left with the clothes we were standing in,” she said.

“We just keep thinking about the items we can’t replace.

“Luckily, we took some family photographs to Sydney recently for a celebration, but so many other precious photographs of the family are gone and that is distressing.”

A fundraiser was launched by the local Jews of Shoalhaven (JOSH) community, which has so far raised more than $15,000.

Cecily said they have been heartened by the “unbelievable generosity” of so many people.

“Roger and I are completely overwhelmed by the kindness and generosity shown to us.

“We are deeply humbled by the love and care and concern for our welfare and recovery from this disaster.”

She added that she and Roger, who is 80 years old, are too old to rebuild their house so they will probably buy a small cottage and stay in the area, but they won’t forget the kindness that has been shown to them.

“We will give a generous donation to our Shoalhaven Rural Fire Service and to Jewish charities once we are able.”

Meanwhile, Nowra resident Kevin Sekel – who started the Facebook fundraiser for the Parrises – was forced to evacuate his own home on Saturday with his wife Yadida because of the local fire risk.

He told The AJN on Tuesday, they were given half-an-hour to pack their bags and get out. The couple sought refuge in Canberra and were hoping to return home this week.

The Sekels had earlier given shelter to two other JOSH members from the beachside village of Manyana, where a nearby house had been destroyed by fire. The home of another friend in Tapitallee was also currently under threat, he said.

Another Jewish family, Kangaroo Valley couple Martine and Gavin Folden and their children, were forced to evacuate their restaurant on New Year’s Eve.