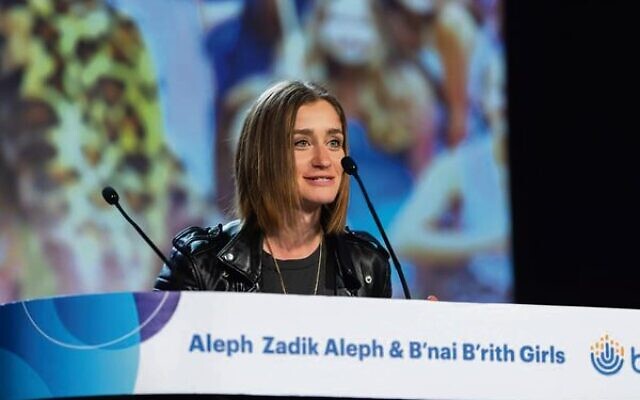 THE barrage of hate and abuse Eve Barlow receives on social media has begun to sound like “white noise” to the Jewish journalist.

Born in Scotland and based in Los Angeles, Barlow describes herself as “the interrupter” to her substantial Twitter following, but it’s the word “Zionist” in her biography that draws vitriol.

“It’s par for the course with being someone who is disruptive, or saying something that isn’t as popular as what might be trending,” Barlow told The AJN ahead of her trip to Australia next month, where she will link up “with the lionesses” of WIZO.

“Whether that’s Israel in the arena of Israel versus Palestine, or something else, when you’re standing up for the party that’s misunderstood and is connected to a deep part of your identity, it can be quite difficult.

“You have to take these things with a grain of salt. I didn’t start advocating for Israel on social media thinking that it was going to be a walk in the park.”

“Make no mistake about it: This social-media onslaught was no accident; this was a coordinated attack.” Thanks to Ari; especially for my tshirt 😉 https://t.co/MvrZ14lk3I pic.twitter.com/o7zc7GiEms

Barlow is an acclaimed music journalist, but many of her work opportunities dried up in the wake of a May 2020 tweet in which she condemned the vandalism of US synagogues amid the Black Lives Matter (BLM) protests over George Floyd’s death.

It read, “woke up to see that synagogues in LA have been graffit’d during the riots with the words FREE PALESTINE and F— ISRAEL. How dare you bring the jewish nation and community into the killing of black american lives.[sic]”

Despite being attacked by an angry online mob for her outspoken tweet, Barlow has consistently advocated for Zionism and now uses her online platform to fight antisemitism which, sadly, she expects to attract hate for.

“I know every time I log on and every time I write a statement, I’ve accepted that’s the reality, so I try not to take it personally and I try not to let it intimidate me or give me some kind of complex of myself,” Barlow said.

But does the level of hatred online ever shock her?

“No, it doesn’t at all, especially not in these lawless, unregulated platforms,” she said.

“The algorithm favours outrage and so it’s no coincidence that hot topics like Jews or the Holocaust or misogyny or the anti-vaxxers are always on rotation on social media. These are the subjects that get people riled, that get people angry, that get people tweeting in droves and that propel these platforms to monetary success.

“The levels of hatred on these platforms, whoever the prejudice is targeted towards, especially when we’re talking about some of the oldest hatreds in the world, no, it doesn’t surprise me because it’s almost as though hatred is the life blood of these platforms.

“That’s a pretty terrifying pill to swallow, but it’s something more people should be talking about and taking action upon.”

Barlow has also noticed an alarming trend regarding the Holocaust, in which people don’t seem to have the knowledge or context for Nazi insignia or language and use it to attack anything that’s bad without understanding the level of pain that exists around it.

“It’s bizarre and it really requires a hard look why we have whole generations of children and young adults – while Holocaust survivors are still alive – who don’t understand the context around the Holocaust,” Barlow said.

While social media can be regarded as an “exaggerated noise chamber”, it does capture a mood among people and for that reason Barlow says online hatred should not be ignored.

“The July 4 shooting [in Chicago], we see a very simple Google search of the shooter brought up a YouTube channel he has where he was being very hateful and wasn’t being punished for that in any shape or form.

“I don’t think it’s wise to ignore what’s going on online as though it’s not a real thing, because it is, but I also think we have to try consider which actors to give our attention to.”

Barlow’s aim is to encourage Jews to “pick up the baton” and empower themselves with knowledge and with a sense of their own identity in the face of antisemitism.

“To me that’s the biggest resistance,” she said.

“This isn’t about fighting antisemitism because how can you destroy a prejudice that’s thousands of years old and that’s going to still exist long after we’re no longer here? My whole focus is on providing verbiage and courage to other Jews.”

Eve Barlow will be the guest speaker at the WIZO galas in Sydney on August 21 and Melbourne on August 24.
For tickets, visit wizonsw.org.au or wizovic.org.au