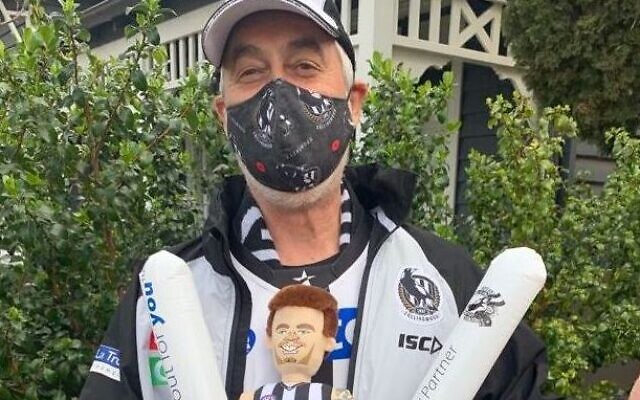 Rodney Horin in his Collingwood gear.

GIDEON Gratzer was described by his family as a gorgeous, funny and gentle boy, devoted to his siblings and family. He loved going to school, loved all things Cookie Monster-related and entertained everyone with his quirky sense of humour and fantastic memory.

In May 2018, at eight years old, Gideon was diagnosed with an aggressive glioblastoma (GBM) tumour. During his treatments which involved surgery, radiotherapy and targeted chemotherapy treatment, his loving family say they were privileged to spend extraordinary quality time with him. In May 2019, almost 12 months after diagnosis, Gideon died at age 9.

In September 2019, Gideon’s family and friends formed Team Gideon with 40 members competing in Connor’s Run – Australia’s biggest event to raise money for paediatric brain cancer, created in memory of local teenager Connor Dawes whose vibrant life was cut short by a brain tumour in 2013. The Robert Connor Dawes (RCD) Foundation was set up by the Dawes family in his honour.

Gideon’s mum, Rebecca, is a legacy ambassador for the foundation, working alongside other parents who have lost children to brain cancer to raise awareness and funds.

Together with the support of the Spotlight Retail Group, Team Gideon raised nearly $90,000 in 2019. With funds raised so far, they have set up the Gideon Gratzer PhD scholarship, supporting a PhD student to research paediatric brain cancer.

As part of his fundraising effort, one of Gideon’s uncles, Rodney Horin, a diehard Carlton fan, reluctantly dressed himself in a Collingwood kit from head to toe in memory of his nephew, a keen Pies supporter.

Rodney recalled how Gideon used to stir him up for being a Blues fan, always bringing up his team’s poor performances.

“He constantly wanted me to wear a Collingwood jumper,” said Rodney. “I’ve succumbed to complete humiliation,” he added.

Although the usual Connor’s Run can’t go ahead this year, Gideon’s family and friends participated in Connor’s Run Your Way Any Day in September, where they individually choose their own activity and intensity.

To find out more or to make a donation, visit connorsrun.com/fundraisers/teamgideon