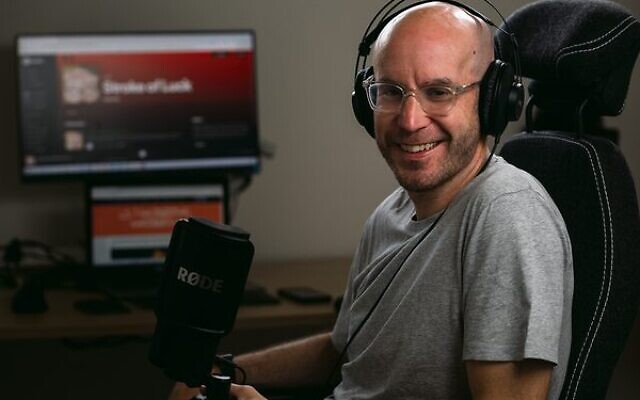 In 2014, Paul Fink had just started his dream job with the AFL. Six months earlier, his wife Lauren had given birth to a beautiful baby boy. Life, as they say, was good.

Yet one morning in January, he complained of a severe headache. That severe headache was a massive brain haemorrhage, resulting from an aneurysm due to an undetected congenital malformation of blood vessels in his brain. It left him with paralysis on the right side of his body, unable to swallow or speak.

What followed was two months in a Melbourne hospital and 10 months full-time outpatient rehabilitation, where Fink learned to walk, talk, read, write and drive again.

He is no stranger to adversity.

Ever since, Fink has been determined to share his story while making the most of his new lease on life. Now, he’s sharing it through his podcast, Stroke of Luck.

While initially Fink decided to do the podcast to help improve his speech, he says the podcast is more about empowerment and how to get through hardship that life so often throws at us. Plus, of course, he wants to raise awareness about stroke and aphasia (speech and word recognition problems).

“I am really passionate about advocating for stroke, particularly for young people who suffer strokes,” Fink told The AJN.

“I am so thankful that I can communicate better now and I have a voice. I know others haven’t been so lucky.”

Fink has had some incredible guests on Stroke of Luck. His first guest, champion skier Alisa Camplin, faced major challenges in her sporting career, including breaking both ankles just weeks before the 2002 Winter Olympics. She also faced personal challenges, losing her first child, Finnan, to congenital heart disease when he was just 10 days old.

Fink also talks to cricketer Michael Klinger, who speaks about his wife’s health battles, losing his mum and how he handled the differences in overcoming adversity in his private life compared to on the sporting field. 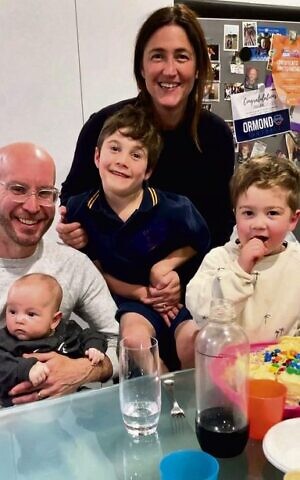 Paul Fink with his wife Lauren and their three children.

It’s no coincidence that many of the guests are in the sporting domain, with sport being a huge passion in Fink’s life. Having people of such high calibre on the podcast will also helpfully raise the profile, and in turn, increase awareness of stroke and aphasia.

When asked what advice he would give to others who are facing adversity, Fink was humble with his answer, saying he is exceptionally lucky in life.

“I never studied psychology and I feel not qualified to preach to other people because I am pretty lucky in my life – food on the table every day, very supportive family, strong friend groups, living in a first-world country with a very good healthcare system,” he said.

“This perspective is also important. Try to imagine being in other people’s shoes and try to be more empathetic with others who are possibly struggling.”

Fink said it’s this positivity and acceptance that helped after his stroke.

“I always focus on the positives and the things I can change, not the things that I can’t.”

He said it’s physical and mental, and of course, as he has shown, he also loves a challenge. But then again, he acknowledges that sometimes, it’s just a ‘stroke of luck’.

Stroke of Luck is available on all podcast channels.