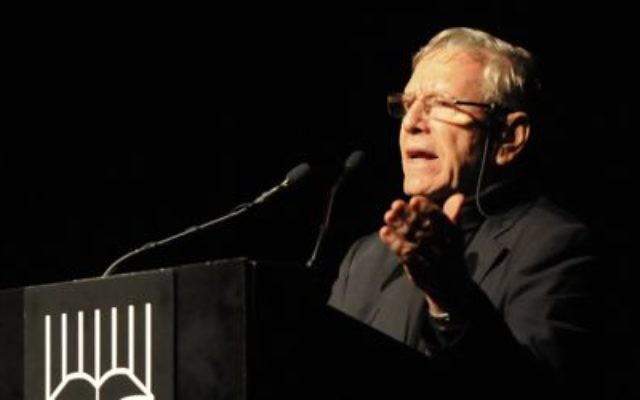 ISRAEL should be the first state to officially recognise Palestine, should United Nations members vote in favour of an upcoming resolution to create the state, declared prominent Israeli author Amos Oz in Sydney this week.

The proposed vote in the UN General Assembly is scheduled to take place next month and, if it goes ahead, is still seen by most as purely symbolic.

But the acclaimed writer, an outspoken advocate of a two-state solution, said it would serve Israel well to be the first to line up in acknowledging Palestinian statehood.

“We may then argue about the borders or the holy places in Jerusalem, but let this be a bargaining and negotiation between two sovereign states,” he told a 500-strong crowd on Monday night. “At last it will become a normal disagreement between two neighbouring states.”

But the writer of A Tale of Love and Darkness appeared more keen to focus on matters other than the Israeli-Palestinian conflict – chiefly, fanaticism, which he described as “the single, most urgent topic of our time”.

Pointing to 9/11 and the recent Norwegian massacre, Oz said: “It’s all over us. It’s everywhere, and it is the syndrome of our time. The seed of fanaticism is a violent, uncompromising self righteousness, the curse of many generations and, in particular, our generation. [It] is a clash between the fanatics of all colours, trades and brands, and the rest of us.”

Israel has long fascinated fanatics, he said, “possibly because it was born of a dream”. As a result, it created unrealistic expectations for Israel to be a “universal role model” in morality, which it cannot live up to in a state of everlasting conflict.

“Unfortunately, Israel’s moral standard in its conflict with the Palestinians is sinking lower and lower,” he said.

He was quick to point out, however, that Israel’s actions in no way justified the anti-Jewish and anti-Zionist rhetoric at past UN-sponsored “anti-racism”  conferences, which he called a “festival of hatred and fanaticism”.

Ultimately, he said, compromise was the opposite of fanaticism.

He expressed his belief that Israelis and Palestinians would eventually tire of conflict and gradually accept compromise as the only solution.