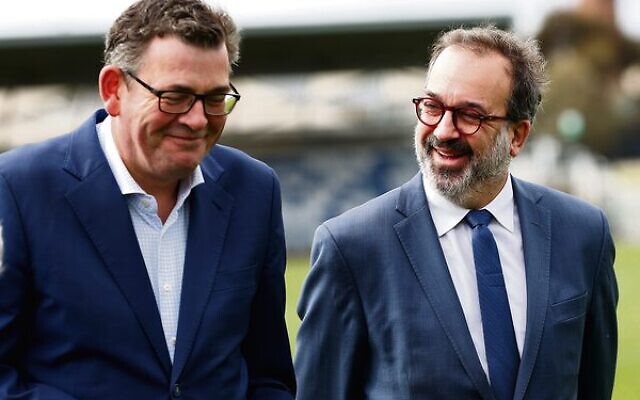 AFTER 16 years, Martin Pakula, a frontbencher in the Andrews government, is calling time on his political career.

The Jewish politician, who is Minister for Jobs, Innovation & Trade and Minister for Tourism, Sport & Major Events, has held several portfolios since he was elected to Parliament in 2006.

Contacted by The AJN, Pakula reflected, “After 10 years as a minister, from 16 years in Parliament, preceded by 13 years in the trade union movement, I just feel it’s time to move on, to give the next generation their chance and to find something else to do. I’m 53, I still have a fair bit of my working life ahead of me, and I have a chance to have one more career, albeit hopefully a less public one. My priority is to have a holiday with the family and I’ll turn my mind to what’s next when I get back in late July.”

Media speculation this week focused on a role for Pakula in sport administration, specifically in the turf industry.

Born in Melbourne in 1969, the son of Polish immigrants who were deported to Uzbekistan during World War II, Pakula studied law at Monash. He became industrial officer at the National Union of Workers and was its state secretary and national vice-president.

Pakula was elected to Western Metropolitan Region in the Legislative Council in 2006, later becoming minister for Industry and Trade and for Industrial Relations. In 2010, he became minister for Public Transport.

In 2013, Pakula won the lower-house seat of Lyndhurst in a by-election. He was attorney-general for four years from 2014.

The father of two, an avid Carlton AFL supporter, was one of four state government ministers whose resignations were announced last week. He joined Deputy Premier James Merlino, Police Minister Lisa Neville and Health Minister Martin Foley in calling it a day.

In 2008, after a heated debate in Parliament in the lead-up to Victoria decriminalising abortion, Pakula denounced MPs and activists for referencing the Holocaust to advance their causes. He also condemned an individual who emailed him that “Abortion [which was permitted in Nazi Germany] led to forced sterilisation, which led to euthanasia, which led to Auschwitz.”

Pakula later stated, “I don’t know what needs to happen for it to get through to these people that it is just not acceptable to be making these sorts of idiotic comparisons between the Holocaust on the one hand, and whatever barrow they might be pushing on any given day … You’ve got to stop comparing the Holocaust to every issue that you want to talk about in Parliament.”