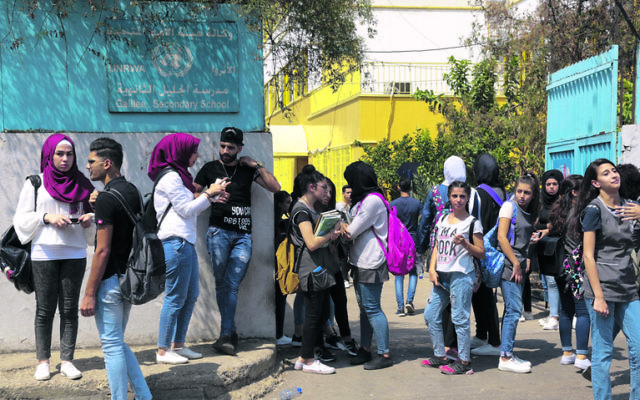 AUSTRALIAN Jewish community leaders have praised a move by the US to cut the entire American aid budget to the UN Relief and Works Agency (UNRWA), which provides aid to the Palestinians.

The latest cut is among measures by which the Trump administration is trying to compel the Palestinians back to negotiations.

Washington earlier froze tens of millions of dollars to UNRWA and reassessed US policy on the Palestinians’ concept of hereditary refugee status, shrinking the number of recognised refugees from five million to around 500,000.

Welcoming the move, Israeli Prime Minister Benjamin Netanyahu said, “The US has done a very important thing by halting the financing for the refugee perpetuation agency known as UNRWA.”

Zionist Federation of Australia president Danny Lamm concurred, saying, “Thank goodness that somebody has finally recognised the reality of the situation and acted on it. These descendants of Palestinians are no different to those millions of others who moved from one country to another, and should be treated as such. What UNRWA has been perpetrating for decades amounts to nothing less than massive fraud.”

Australia/Israel & Jewish Affairs Council executive director Colin Rubenstein said, “Efforts to pressure and, if necessary, defund UNRWA in its current form and reform it are essential steps toward promoting Israeli-Palestinian peace and, on that level, the withdrawal of UNRWA funding by the Trump administration is welcome.

“Yet by the same token, no one wants to see Palestinians lose access to education, healthcare and other welfare services that UNRWA provides – both for humanitarian reasons, and because, as Israel’s security sector has pointed out, withdrawing such funding and services risks causing an escalation in violence from the West Bank and Gaza.”

Rubenstein called on Canberra “to reassess its contributions to UNRWA with a view to reallocating that money so that it continues to help provide essential services and development aid to Palestinians without the dangerous baggage that UNRWA brings to the provision of such services”.

Executive Council of Australian Jewry president Anton Block said, “The US has recognised how wrong and anomalous it is for the Palestinians to be the only community in the world to claim that the descendants of refugees ad infinitum must also be counted as refugees … We support aid that helps the world’s neediest, including among the Palestinians, but this should be administered through the UNHCR.

“We would certainly support the Australian government in conducting its own review of the merits of continuing to fund UNRWA and reallocating the funds to other service providers.”