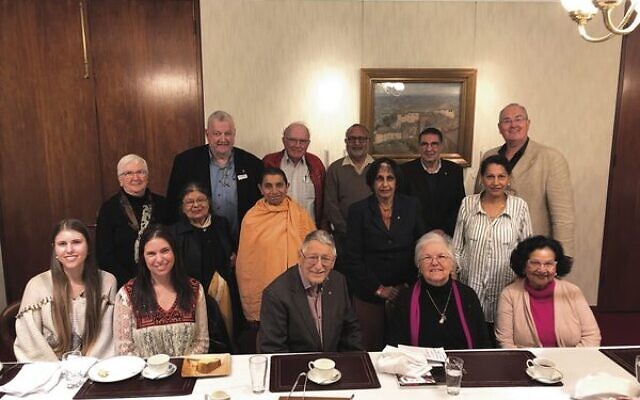 Tribute was paid to Josie Lacey in New South Wales State Parliament by Walt Secord MP in a special event honouring her longstanding service to the community.

Secord, deputy chair of the NSW Parliamentary Friends of Israel and the Shadow Minister for Police and Counter Terrorism, honoured Lacey for her broad range of roles in the community.

Over a long and flourishing career, Lacey served as an executive member of the NSW Jewish Board of Deputies, president of WIZO, and life member of the Executive Council of Australian Jewry and the Ethnic Communities Council (ECC) of NSW.

She participated in the anti-racism taskforce of the ECC, as well as being active in numerous inter-faith organisations, including the World Conference on Religion and Peace.

In 1992, Lacey was awarded an OAM for services to community relations and the Jewish community, and in 2018 published her book An Inevitable Path, which was launched at the Sydney Jewish Museum.

Lacey, born in Romania, came to Australia as a refugee fleeing Nazi Europe in 1939 with her parents and brother.

The event and speech at State Parliament coincided with the 10th anniversary of Secord hosting the NSW chapter of Religions for Peace.

Headed by Lacey, Religions for Peace comprises spiritual leaders and adherents of the Buddhist, Baha’i, Jewish, Muslim, Sikh and Hindu faiths, as well as various Christian denominations including the Uniting Church in Australia, the Catholic Church, and the Egyptian Coptic Church.

“The group is a model on how we should all conduct ourselves; it carries out all of its activities with respect and dignity for others,” Secord said in his speech.

“It is also a model for NSW as we strive for a more harmonious and tolerant society in our state.”

Lacey was joined at the event by her husband of 61 years, Ian, and their three daughters Ruth, Judith and Rebecca.

“As the title of her book suggests, [Lacey] was always on a path; a path to fight intolerance and injustice,” said Secord.

“Whether it has been fighting antisemitism in NSW, building bridges with other faiths, assisting other migrants, or fighting for women’s rights in the Jewish community, Mrs Lacey was there.”