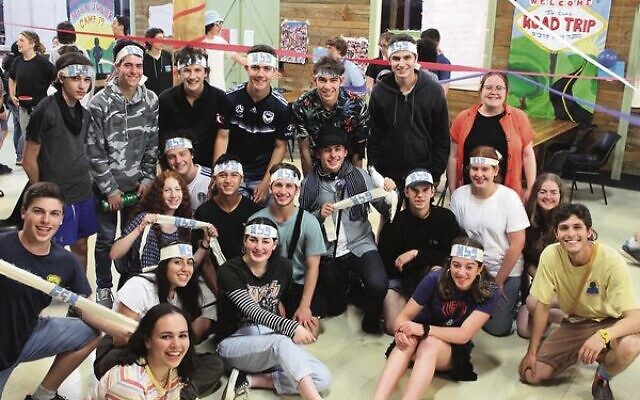 Year 11 Hineni participants and leaders on Summer Camp in January.

A QUARTER of a century ago, Hineni Melbourne was established with the mission of producing young adults who were actively engaged with Judaism and Zionism, who were critical thinkers and active members of the Jewish community.

Today, this vision has been brought to fruition. The Modern Orthodox, Zionist, activist Jewish youth movement is steadily growing and engaging more than 120 participants, including Liav, a current year 11 student whose mother, Rachel Allen, was a former Hineni leader.

Rachel recalled her time at Hineni, running weekly programs for children in grades 9 and 10, developing her leadership and organisational skills.

Hineni was always open to all Jewish students, she remembered, “no matter what stream of Judaism they identified with, they seemed to find a place at Hineni”.

This year, Rachel’s daughter Liav has been running weekly programs for children in grades 2 and 3 as part of Hineni’s Madatz (Young Leaders) Program.

Grateful to have been introduced to “an incredible network of people,” Liav said being involved has strengthened her appreciation for Zionism and her personal connection to Israel, adding that she has enjoyed being exposed to different ideas and perspectives.

Liav inherited her mother’s chultzah (Hineni shirt) which she now wears proudly, stating that it was incredibly meaningful to “know that we have represented the same youth movement and both meaningfully contributed to Hineni and the wider Jewish community”.

Rachel added, “Hineni has given to my daughter in the same way it gave to me, opening up opportunities to develop skills and learn about Judaism, Israel and what it means to be Jewish and part of the community.”

To learn more about Hineni, go to hineni.org.au