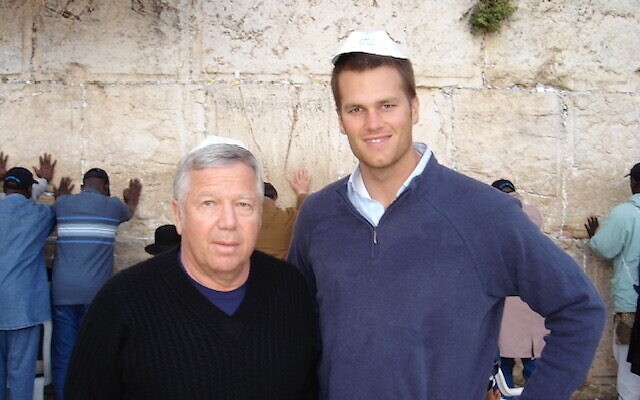 Robert Kraft (left) and Tom Brady at the Western Wall in Jerusalem, 2006. Photo: Courtesy via Times of Israel

Widely regarded as the greatest quarterback in NFL history, Brady’s resume includes 10 Super Bowl appearances, seven Super Bowl wins — all but one of them with the New England Patriots — five Super Bowl MVPs, and records for most wins, passing completions, touchdowns, yards, and much more.

His exploits and decades of elite performance on the field are well-known.

Brady’s connections to Israel and Judaism, however, have remained a footnote in his celebrated career and life.

New England Patriots owner Robert Kraft, a proud Zionist and close friend of Brady, recounted to The Times of Israel on Wednesday his week in Israel with the GOAT.

“My first visit to Israel was on my honeymoon in 1963, and I fell in love with it,” said Kraft. “I have been taking people on mission trips to the Holy Land to share its spirituality and splendour ever since. I have sponsored more than 100 mission trips, giving first-time visitors a cultural and spiritual experience of a lifetime.” 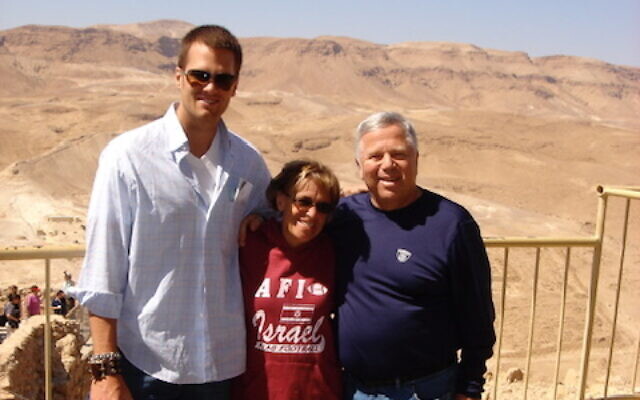 Tom Brady (left) with Myra and Robert Kraft at Masada, 2006. Photo: Courtesy via Times of Israel

Among those mission trips, Kraft and his late wife Myra regularly took Patriots players and NFL Hall of Famers to Israel.

In 2006, the Krafts brought then-young Brady to the country for his first visit, along with CBS anchorwoman Sara Underwood and Joseph Campanelli, then-CEO of Sovereign Bank.

“He had never been before,” said Kraft. “I had taken a couple of his teammates, Richard Seymour and Benjamin Watson, on a trip a few years earlier and I know that they had shared their unbelievable experiences with others. Tom was eager and very excited to get to go.”

Kraft said the group “had a great week together.”

“We visited a number of the traditional Christian sites and I watched Tom be baptised in the Jordan River,” he recounted. “What I loved about Tom was his appreciation for the culture and his interest in trying to understand Israeli politics. We had some deep, thought-provoking and meaningful conversations.”

Participants on the trip say Brady was visibly moved by what he saw and experienced. Barry Shrage, a close friend of the Kraft family and past president of Boston’s Combined Jewish Philanthropies, remembers a Chabad rabbi who was close with Myra leading the group’s Friday night dinner. “Everyone started to dance, and Tom soon joined in. To see Tom Brady dancing in a circle with us, singing with us — that was really special.

“I think he was enormously moved.”

The Krafts took Brady to an IDF infantry base as well. Boston-born Netzach Yehuda battalion soldier Avi Sandler was in basic training in the Jordan Valley. He had just completed a week of field exercises and a long march back to his base. He was told to put on his beret and report to the deputy company commander’s office. 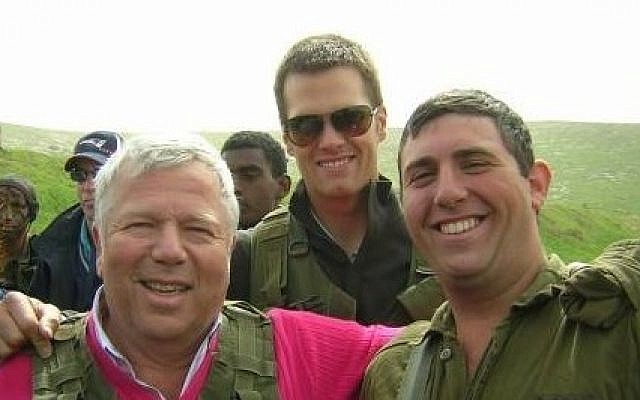 “I was nervous, as at that point one only went to his office if he was in trouble,” said Sandler. “As I entered the office and saluted, I saw two other soldiers with American backgrounds already seated. We were told that a group of important Americans will be visiting the base tomorrow and that we were chosen to attend as representatives.”

Fellow soldier Label Garelik was sitting in his room when his sergeant came in and told him that there were some Americans visiting who wanted to speak to soldiers who had moved to Israel from the US.

“Some Robert Kraft or something.”

The next morning, the soldiers were bused to the firing range, where a weapons demonstration was prepared for the visitors. 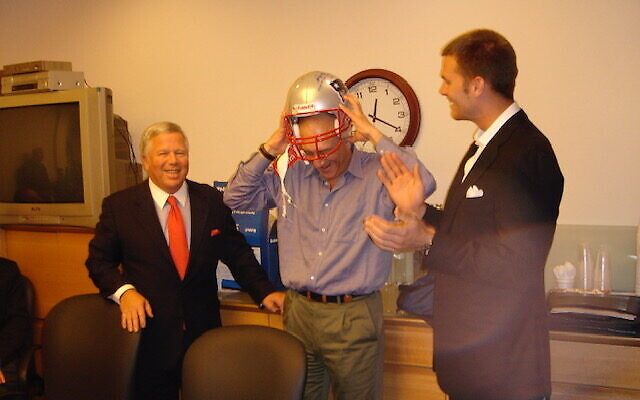 “Quietly, on the side, my friend says, ‘Avi, isn’t that Tom Brady?’” Sandler recalled. “Other than Mr. Kraft, we had no clue who was visiting. I responded, ‘It looks like him but what would he be doing here?’”

“We quickly turned to Brady and asked, ‘Are you Tom Brady?’”

“‘Yes,’ he responded. Our mouths dropped.”

One of the soldiers asked Brady if he wanted to play football with them.

The soldiers gave a demonstration of the various weapons lined up at the range. Brady exclaimed “Damn!” as the machine guns were firing.

The Patriots quarterback even took some target practice at the base’s shooting range. “I was worried about the recoil,” Shrage recalled. “We certainly didn’t need Brady hurting his throwing shoulder shooting a rifle.”

Other New Englanders were given the opportunity to meet Brady at the Israel Museum at a Saturday night dinner. 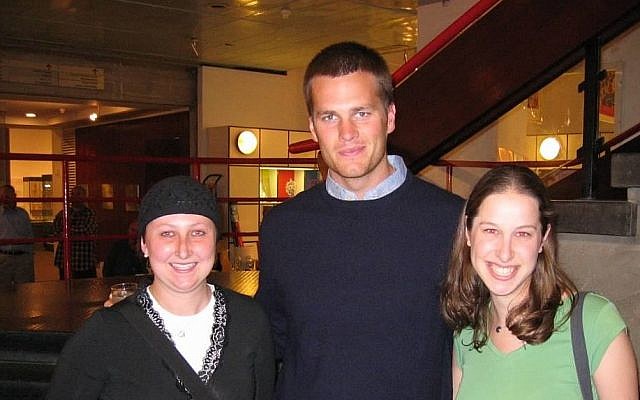 “He said he really enjoyed humus,” remembered Israeli lawyer Hillel Katchen, who was a law student at Bar Ilan at the time. “He seemed really down-to-earth. He said he enjoyed Tel Aviv more because nobody recognized him there.”

Kraft said that the visit strengthened the connection between the two men.

“I have always treated Tom like an extension of my immediate family, and the trip to Israel just created a stronger bond,” he explained. “As you know, there is no place in the world quite like Israel and sharing that experience with someone for the first time is why I love sponsoring so many mission trips to Israel.”

The statement released by Kraft after Brady’s retirement reflected that bond: “Words cannot describe the feelings I have for Tom Brady, nor adequately express the gratitude my family, the New England Patriots and our fans have for Tom for all he did during his career. A generation of football fans have grown up knowing only an NFL in which Tom Brady dominated… I have the greatest respect for Tom personally and always will. His humility, coupled with his drive and ambition, truly made him special.” 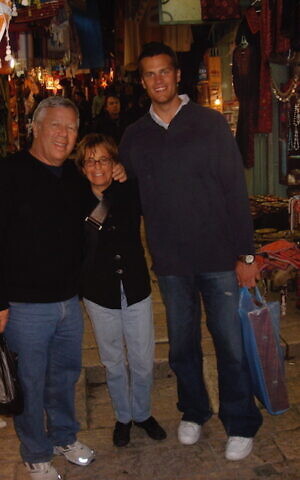 Tom Brady with Myra and Robert Kraft in Jerusalem, 2006. Photo: Courtesy via Times of Israel

It’s not clear if it was the trip that inspired Brady, but he keeps a large menorah in his home. “We’re not Jewish,” he told The New York Times in 2015. “But I think we’re into everything… I don’t know what I believe. I think there’s a belief system, I’m just not sure what it is.”

Brady probably isn’t the only one in his family with a menorah at home. His sister Julie married Jewish former Boston Red Sox star Kevin Youkilis in 2012.

He also has attended other Jewish celebrations with the Krafts over the years, which the Patriots CEO called “private moments with Tom and my family.”

“As a football fan, it is sad to see the greatest of all time announce his retirement,” Kraft reflected. “It was a privilege to watch him play for the past two decades. I am grateful for all he did for the New England Patriots and congratulate him on such a remarkable career. The NFL won’t be the same without him.”