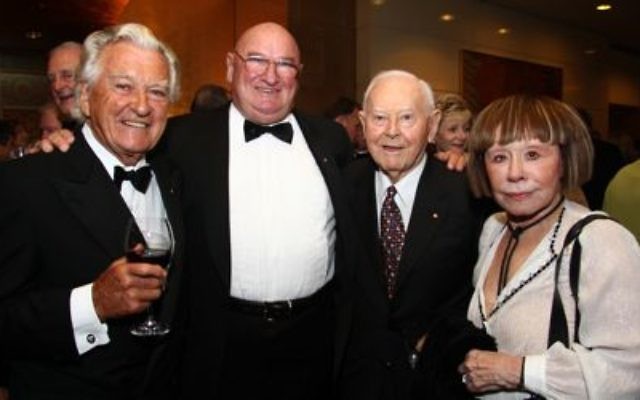 Federal Opposition Leader Tony Abbott and former prime minister Bob Hawke were among the distinguished guests, who came together to salute the self-made industrialist.

In their introduction, Fox’s long-time friends Solly Lew and Bill Kelty noted the honouree’s generous nature, which has served a wide range of charitable causes over the years, including Jewish ones.

Lew recalled how he had met Australian volunteers in Israel during the 1967 war who had received preparatory training on truck driving through Fox’s trucking business at that time.

The speakers noted that Fox had been such a reliable supporter of Jewish charities that he had been often mistaken for being Jewish, to the point of receiving packages of matzah for Pesach each year.

Fox, during his remarks, mentioned how his daughter had married a Jew and his grandson had a brit and is preparing for his bar mitzvah.

This recurring underlying theme of the evening, of Fox’s interfaith support and cooperation on a personal level, dovetailed well with B’nai B’rith’s speakers and their own presentation and remarks about what the organisation stands for and what they do.

Anna Marks, B’nai B’rith senior vice-president (NSW), speaking in place of president James Altman, reminded the audience that while B’nai B’rith was widely recognised as the world’s largest membership-based Jewish organisation, its mission is “people helping people – working together for a better society”.

Fox summed up the relationship in his first words after taking the podium, which attendees said could have applied as much to Fox as an ally of the Jewish community, as from Fox to those gathered to honour him.