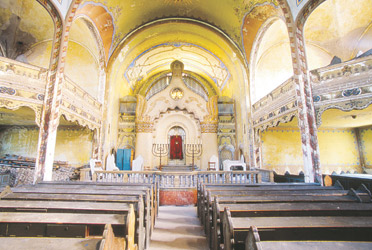 A photo of the Subotica Synagogue in Serbia from Jono David's global collection. Photo by: Jono David

A JEWISH photographer attempting to document synagogues around the world has criticised Australia’s community security institutions for “inflexible and underhanded” policies.¬†Jono David is a Japan-based freelance photographer with a website that displays artistic photos of Jewish buildings all over the world.

“My mission is to contribute to the preservation of Jewish communities by documenting them photographically,” he wrote in an open letter to the Jewish community.

¬†David sent 80 emails to synagogues and community organisations around Australia. Initially, he received approvals to photograph the inside and outside of buildings, but later the approvals turned to rejections after the Communal Security Group in NSW and the Community Security Group in Victoria sent out warning letters.

The AJN understands the security groups did not believe that David himself was a security threat.¬†Instead, they were concerned that photos featuring internal and external shots of Jewish community buildings in one central location on the internet posed a security risk.The security groups did not ban organisations from providing access to David, rather they encouraged them to decline his request. This notification left David furious and frustrated.

“I challenge anyone to name a single incident, worldwide, where photographs played an integral part in an attack on a synagogue, or a Jewish institution,” he said.¬†”While I have, on rare occasions, been denied photo requests, I could never have imagined being blacklisted on an entire continent.”

In his initial email to community organisations, David did indicate that he was sensitive to security concerns and would not photograph surveillance cameras, exits or entrances, offices or corridors.¬†He told The AJN he hopes Australian community organisations will come around, adding that he has planned a trip here in August and September of 2010.¬†

“A hypersensitive security measure is a victory for the terrorists, but by photographing a vibrant community, the Jewish people win,” he said.¬†David’s¬† comprehensive website, www.Jewishphotolibrary.com, features around 18,000 photos. His collection includes images of Jewish war graves in Tobruk, Libya, the street sign for Jews Street in Cochin, India and photos of the interior and exterior of the New London Synagogue.