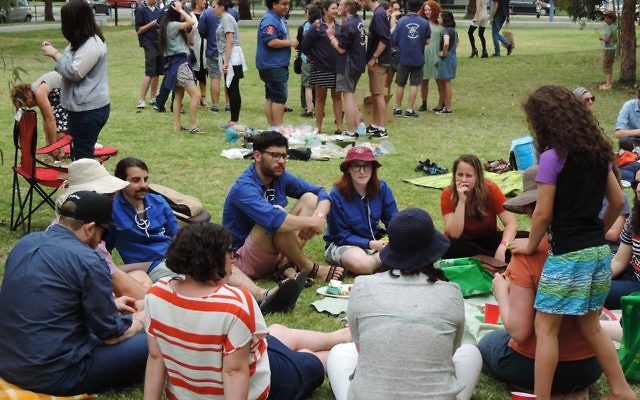 A PICNIC celebrating cultural diversity, held in response to the planned appearance of One Nation senators Pauline Hanson and Malcolm Roberts at an event in Caulfield earlier this month, was hailed in the Victorian Parliament last week as “a powerful show of unity against the divisive actions of some members of the community”.

While the Hanson/Roberts event was ultimately cancelled for security reasons, the gathering in Caulfield Park still went ahead, attracting around 90 participants, including representatives from several communal organisations, including Hashomer Hatzair, Habonim Dror, Hineni, SKIF, Shira Hadasha, the National Council of Jewish Women of Australia, and the Australian Jewish Democratic Society.

Stating that “In such explosive political times, it was a real pleasure and privilege to attend … a multicultural picnic in Caulfield organised by the Jewish community to celebrate diversity and social cohesion,” Springle noted in Parliament last Wednesday that “the common theme that ran through the speeches delivered by a politically and ideologically diverse line-up of speakers was the rejection of all forms of hate and intolerance.”

Describing the event as “an important and powerful show of unity against the divisive actions of some members of the community”, she added, “Each speaker showed steadfast solidarity with our Muslim brothers and sisters at this time, when they are being targeted just as other minority groups have been targeted throughout history, particularly the Jewish community itself.”

The picnic’s organiser, Bracha Rafael, said the aim of the gathering was to host “a message of hope and hospitality, rather than fear and isolation”.

“There was an amazing turnout on the day, with great numbers from many communal groups,” she said. “The speakers gave us much to consider, and though they held a wide range of views on Australian politics, on religion, and on Israel, they were united in their support for a thriving, vibrant and peaceful multicultural society.”

Rafael added, “Many important conversations were begun that day, and I am deeply grateful to belong to a community that has the maturity, the generosity of spirit, and the resolve to do the important grassroots work of preserving the social fabric in our turbulent times.”