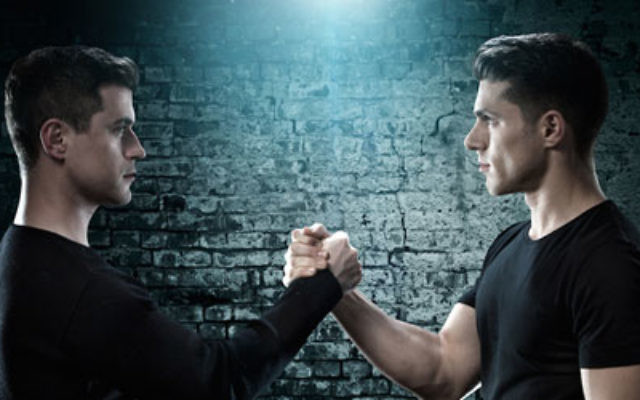 There hasn’t been a professional production in Australia for 21 years, but Blood Brothers made a return to Sydney earlier this year and its Melbourne season opens at the Alex Theatre in St Kilda on July 14.

Blood Brothers tells the story of twins who were separated at birth when their mother could not afford to keep them both. Growing up just streets apart they become best friends, despite never knowing the truth of their heritage and fall for the same girl, with tragic results.

Piterman, who has starred in many musicals including West Side Story and An Officer and a Gentleman, plays Edward, one of the twins. He sings several songs including a solo of I’m Not Saying A Word.

“Blood Brothers has some amazing songs,” says Piterman. “It is a role that I wanted to do, but more as an actor than a singer.”

Piterman says that he did not see the musical at its Sydney season at the Hayes Theatre.

“I have chatted with Helen (Dallimore), Bobby (Fox) and Michael (Cormick) about it and they said that they had the best time working together on the show,” he says.

“It’s such an engaging script and strikes a chord with the audience; it has had so much success on the West End and Broadway.”

As most of the cast are based in Sydney, Piterman will head there next week for rehearsals. The musical premieres at the Alex Theatre on July 14 for a three-week season.

In 2013, Piterman,who has completed a personal trainer course and has studied with the Australian Institute of Fitness, established a gym in St Kilda and a fitness program called Pitfit, which is enjoying great success.

It was also announced recently that Piterman will star in a new touring production of Andrew Lloyd Webber’s hit musical Cats.

“It is two years since I got back from London – where I performed in Hairspray – and I put all my energy into establishing Pitfit and thought it would be 2016-17 before I would be back on stage doing musicals, but my agent told me about Blood Brothers and Cats and I went to the auditions and scored the roles.

“I’m passionate about performing and fitness, so to be able to do both is a real blessing.”

After the season of Blood Brothers, Piterman has a week off before starting rehearsals for Cats in preparation for the premiere in Auckland before the Australian tour opens in Sydney at the Capitol Theatre on October 30.

Blood Brothers was last staged professionally in Melbourne in 1994 at the Comedy Theatre with Delia Hannah and Stefan Dennis in the lead roles and actor-director David Soul, who starred in the TV series Starsky and Hutch, as the narrator.

The latest production is produced by Enda Markey, directed by Andrew Pole with musical direction by Kellie Dickerson.