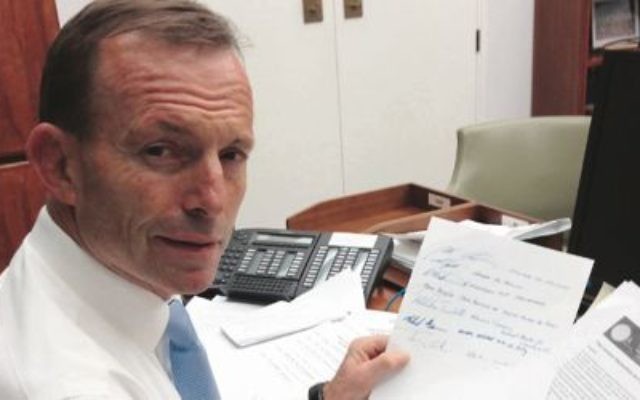 AN attack on a landmark declaration against anti-Semitism appears to have backfired, with more than 50 Coalition  MPs signing the historic ­document this week.

The London Declaration on Combating Anti-Semitism, signed by Prime Minister Julia Gillard on April 23, the first Australian parliamentarian to do so, was blasted this week by Sydney academic Professor Stuart Rees. Rees is a council member of the University of Sydney’s Centre for Peace and Conflict Studies, which supports the Boycott, Divestment and Sanctions (BDS) movement. The centre last year tried to stop the university’s Israel Research Forum, which brought together Israeli and Australian academics to share research.

“Recently, the University of Sydney was plagued by anti-Israel activists promoting the Boycott, Divestment and Sanctions (BDS) campaign against Israel,” said Pyne as he signed the declaration.

“Activism, boycotts and sometimes sanctions campaigns aren’t always anti-Semitic, but when you target individual businesses because they are Jewish, it is clearly anti-Semitic.

“And it is sad that 70 years after the Second World War and the discovery of the Holocaust, we are still having to defend the right of Jewish people to live in their Jewish homeland in Israel free from this kind of anti-Semitic campaign. It is vitally important that Jewish Australians know that their parliamentarians won’t acquiesce to a campaign that is designed to break the relationships between Israelis and Palestinians, whether they are academic, business-related or community-related.”

In an email obtained by The Australian, Rees slammed Pyne’s comments as “the usual childish, thoughtless but easily populist response”.

Asked if his comments also applied to the Prime Minister, he replied: “Of course”.

“The resort to charges of anti-Semitism regarding the worldwide criticisms of the internationally illegal policies of the government of Israel is an age-old technique to stifle any criticism of blatant human rights abuses,” Rees said.

Liberal MP Josh Frydenberg responded by asking a group of Coalition MPs to sign the declaration. After Question Time on Tuesday, dozens of MPs, including Opposition Leader Tony Abbott, followed Pyne’s example. Key Coalition senators were also set to sign it this week.

Describing the wave of support for the declaration as “fantastic”, Frydenberg told The AJN: “The declaration is an important document which shines a light on the resurgence of anti-Semitism worldwide while outlining a series of practical measures to counter this scourge. Only with the efforts of free thinking, community-minded individuals and governments representing both sides of the political divide can we take the united action necessary to build tolerance and understanding in our society.”

Attorney-General Mark Dreyfus, who was among a number of Labor MPs who also signed the declaration, said the PM was acting in the interests of the country. “The Prime Minister represented our nation, our government and the parliamentary Labor Party when she signed the London Declaration Combating Anti-Semitism,” he said.

Member for Melbourne Ports Michael Danby, also a signatory, said Gillard had blazed a trail for her parliamentary colleagues. “I am pleased that the Prime Minister’s action on the London Declaration has prompted the Coalition to join us in signing this important document.”

A POST on Facebook from the Vice-Chancellor of the University of Sydney reaffirming that the university does not support boycotts against Israel has garnered over 65,000 likes.

The post follows last month’s resolution by the university’s Student Representative Council (SRC) to endorse the global Boycott, Divestment and Sanctions (BDS) campaign against Israel and call to cut ties with the Technion-Israel Institute of Technology.

“We’ve received lots of comments and questions about the Student Representative Council’s motion to support the boycott of Israeli university Technion. The University of Sydney does not support the SRC motion nor the proposal originally put by Associate Professor Jake Lynch,” the post says.

Meanwhile, an SRC motion aimed at countering last month’s resolution was postponed last week after the SRC meeting did not reach quorum.

An AUJS petition for the SRC to rescind the original motion has attracted 2789 signatures.