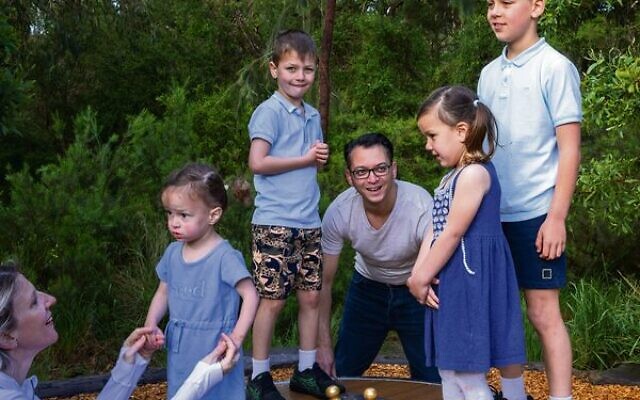 Asher Judah, his wife Mary and their four children taking time out in the Ashwood electorate. Photo: Quentin Jones

ASHER Judah is deeply concerned about the rising cost of living faced by Victorians. The Jewish candidate and father of four who won Liberal pre-selection for the new seat of Ashwood in Melbourne’s east is campaigning on policies to help Victorian families counter rising interest rates and inflation.

Ashwood was created from a redistribution of the Burwood electorate, the other part of that seat going to Box Hill.

“The most consistent thing we hear from the community is the cost-of-living crisis,” Judah told The AJN. “Their bills are going up, their family budgets are shrinking, whether it’s through their mortgage or at the petrol bowser or at the shops.

“We’ve got a clear plan to reduce the cost of living. We’re freezing water bills, there’s free kinder for three- and four-year-olds. We have $2 public transport fares as well … and $200 for every student who wants to take up sport, dance or extra-curricular activities. There’s a range of measures targeted at families to ease their budgets to help us get through this difficult time with interest rates rising, uncertainty on oil and inflation over seven per cent,” he said.

Judah, a grandson of Holocaust survivors, whose parents met and married on a kibbutz, was raised by his mother after his father passed away when he was eight. He was active in the Jewish 15th Brighton Scouts and attended Bentleigh Progressive Synagogue (now Etz Chayim) where he celebrated his bar mitzvah.

Earning degrees in commerce and arts from Deakin, he was director of the Property Council of Australia for five years. He now owns a joinery and hardware business.

Concerned at how Melbourne’s infrastructure will perform under rising population pressures, he said, “In the Ashwood community, we’ve been running a campaign to slow down the pace of growth locally, and put a stop to Labor’s plans to build high-rise Mount Waverley shops.”

“By the end of the decade, we will be home to the biggest city on the continent. And that won’t change this century. So how Melbourne copes with more people is one of the biggest challenges we’re facing. In the Ashwood community, we’ve been running a campaign to slow down the pace of growth locally, and put a stop to Labor’s plans to build high-rise Mount Waverley shops.

“And a key part of that is to make sure the infrastructure can keep up with growth. One of the commitments we’ve made locally is to remove the boom gates of three train stations nearby. So Glen Iris, Tooronga and Kooyong train stations will be grade-separated,” he said.