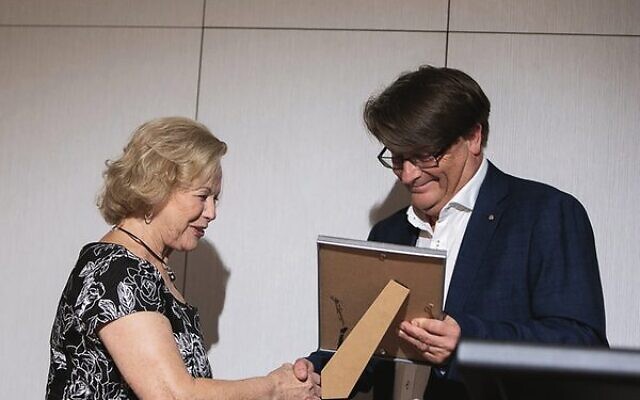 Leading academic Racheline Barda was honoured last Sunday by the NSW Jewish Board of Deputies (JBD) and the Sydney Jewish Museum (SJM) for her research work on the expulsion of Jews from Arab countries.

Barda was a guest speaker at the annual commemoration of Mizrahi and Sephardi Jews, held at the SJM. Since 2014, November 30 has been recognised as the official date designated by Israel to commemorate the plight of Jews displaced from Arab countries and Iran in the 20th century.

Barda and her husband Joe were born in Egypt, but married in Rome in 1957 before later emigrating to Australia.

“The SJM is like my second home – I’ve been involved there for over 25 years as a volunteer guide,” Barda told The AJN.

“So it meant a lot to me to be honoured in this way. It’s not the first time I’ve spoken about my origins and my community and it was very special to have the day that’s been assigned by Israel as the beginning of the expulsion of Jews from Arab lands. I was born in Egypt and members of my family were affected.”

This year’s event focused on the plight of Jews from Morocco.

“In 1948 there were 260,000 Jews living in Morocco, forming the largest Jewish community in any Arab-Muslim country,” said NSW JBD vice-president Richard Glass.

“Today, only 3000 Moroccan Jews remain in Morocco. The silent exodus of the Jews from Morocco conceals a painful rift for Jews and Muslims alike.”

First Secretary at the Moroccan embassy Younes Benay was another guest speaker at the event, where he spoke about a “reconnection” in relations between Morocco and Israel.

“This new era, brought by the Abraham Accords, constitutes an opportunity to consolidate this relationship, which has existed for many years, and which could serve peace,” Benay said.

“There is real enthusiasm in both Morocco and Israel for this reconnection.”