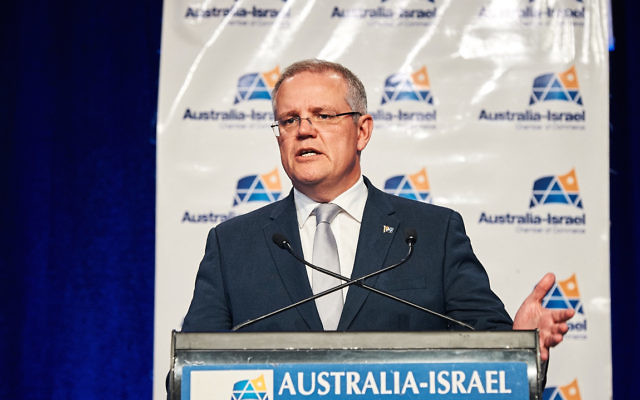 PRIME Minister Scott Morrison has denied that an announcement to look at moving Australia’s embassy in Israel to Jerusalem is motivated by Jewish votes in this weekend’s Wentworth by-election.

Morrison announced on Tuesday that the government would consider recognising Jerusalem as Israel’s capital “without prejudice as to its final boundaries” and examine the merits of moving the embassy to the western part of the city.

He said the announcement’s timing was due to a United Nations vote, on Wednesday morning, on the Palestinian Authority (PA) being elected chair of the G77 coalition of developing nations. Australia was one of only three countries to vote no.

Morrison said the UN resolution “seeks to confer an official status” on the PA “it does not have”, and could therefore undermine efforts to bring the parties together to work towards a settlement.

He added that it was a significant decision which would raise questions about his stance on other related issues, and “I thought it was important that that context be provided straight away.”

The Prime Minister also announced closer security ties with Israel through an exchange of defence attaches and a review of whether the Iran nuclear deal (known as the Joint Comprehensive Plan of Action, or JCPOA) “remains the best vehicle to address the international community’s concerns about Iran’s nuclear ambitions”, with findings to be released by December.

He reiterated Australia’s ­commitment to a two-state solution and suggested an embassy move might help contribute to that ­outcome.

“Not a lot of progress has been made,” he said of the peace process, “And you don’t keep doing the same thing and expect different results.”

Citing an article written by Wentworth candidate and former ambassador to Israel Dave Sharma in May, Morrison said, “When people say sensible things, I think it is important to listen. Particularly, when they have the experience of someone like Dave Sharma.”

Israeli Prime Minster Benjamin Netanyahu tweeted that he was “very thankful” after speaking to Morrison on Tuesday.

“We welcome Australia’s reassessment of the JCPOA. Israel has long held that this agreement does not effectively prevent Iran from developing nuclear capabilities.”

The announcement was also applauded by Australia-Israel Parliamentary Friendship Group chair Senator Eric Abetz, but came under sharp rebuke from opposition foreign affairs spokesperson Penny Wong, who said the embassy should remain in Tel Aviv until the conclusion of any negotiations.

“He is just posturing ahead of a by-election that he is desperate to win,” she said.

“Foreign policy, and Australia’s national interest are far too important to be played with in this fashion.”

Executive Council of Australian Jewry president Anton Block thanked the Prime Minister “for his moral clarity on these issues”.

“Every state has the right to determine where within its sovereign territory its capital should be located,” he said.

“Recognising this simple fact would in no way preclude a future agreement between Israel and the Palestinians and we welcome the Prime Minister’s affirmation of support for a two-state solution.”

Block also expressed support for Australia’s “no” vote on the PA chairing the G77.

“For decades, the Palestinians have manipulated international bodies, not least the UN, to advance their agenda of seeking to isolate and delegitimise the State of Israel,” he said.

“The result has been to permanently mire the UN in the conflict, at the expense of its credibility, while also limiting its ability to support genuinely oppressed peoples throughout the world.”

Australia/Israel & Jewish Affairs Council (AIJAC) chairman Mark Leibler said, “These new Australian foreign policy announcements are courageous, measured and principled – and most welcome. We look forward to the results of the government’s reviews of its policies on Iran and Jerusalem.”

Zionist Council of Australia president Danny Lamm said, “Scott Morrison is to be congratulated for an outstanding statement of strength and confidence.

“For the government to champion such a move … would reaffirm your strong commitment to the State of Israel, its sovereignty, its democracy and the values we share.”