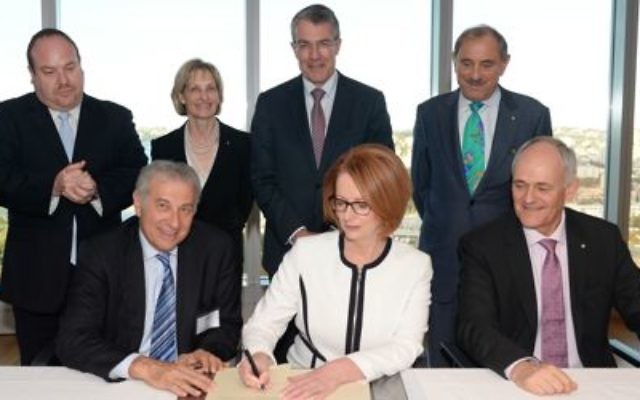 IN a show of solidarity with world Jewry, Prime Minister Julia Gillard on Tuesday became the first Australian politician to sign the London Declaration on Combating Anti-Semitism on Tuesday.

Gillard, flanked by Attorney General Mark Dreyfus and Australian Jewish communal leaders at the offices of Investec in Sydney, said: “It is with a sense of history that we do the signing.”

The London Declaration, drawn up at an international conference on anti-Semitism in 2009 involving politicians and experts from 35 countries. calls on governments, international institutions, as well as political and civic leaders to combat any manifestation of anti-Semitism and discrimination.

Noting “the dramatic increase in recorded anti-Semitic hate crimes” and expressing alarm over “the resurrection of the old language of prejudice” and “government-backed anti-Semitism”, the declaration commits signatories to challenge “hate against Jews” to

legislate against hate crimes, to identify where the threat comes from and implement policies to tackle it, to promote education, awareness and training against anti-Semitism and to take “appropriate and necessary action”  to prevent the airing and dissemination of anti-Semitic material via broadcast and online media.

It also requires signatories to challenge any foreign leader, politician or public figure that denies, denigrates or trivialises the Holocaust.

In a statement after the signing, Gillard reflected on the “offensive and horrible” acts of anti-Semitism committed in 2012, including the desecration of Jewish graves in Prague,  a bomb at a Jewish community building in Sweden and graffiti being spray painted in shopping centres in Melbourne saying “The best Jew is a dead Jew”.

“In the face of anti-Semitism, there can be no bystanders. As citizens, as leaders and as nations, we must act,” Gillard wrote.

“The London Declaration is, above all a warning and a witness to those who hold offices of public trust.

“In the 1930s, another generation of leaders failed the test. We face the same test – and we must not fail it.”

Executive Council of Australian Jewry (ECAJ) executive director Peter Wertheim said it was an important day for the community.

“The declaration requires governments to legislate against hate crimes and incitement to racial hatred – an especially important commitment given the calls from some quarters for a watering down of Australia’s existing laws against racial vilification,” Wertheim said.

He said the declaration also endorses the European Union Monitoring Commission’s working definition of anti-Semitism, which acknowledges that some forms of rhetoric against Israel can and do cross the line into anti-Semitism.

“Governments are called upon to use this definition to inform national policy and media standards.

“This may be an important tool in any future racial vilification cases the ECAJ may need to pursue in the future.”