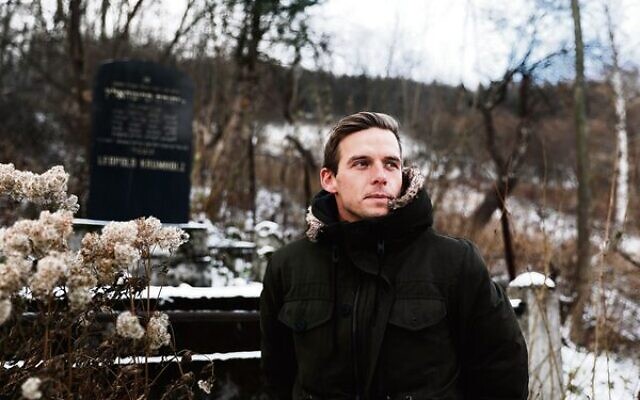 Dariusz Popiela with his research and restoration project.

IN a stark way, Polish champion K1 slalom canoeist Dariusz Popiela stumbled across the broken chain of memory insulating Poles from the dark legacy of the Shoah.

Popiela, 37, winner of the 2021 POLIN Award, which recognises non-Jews who contribute to the renaissance of Jewish life in Poland, spoke to The AJN before his visit to Australia as orator for the Australian Society of Polish Jews and their Descendants (ASPJ).

As a boy dreaming of a kayaking career, he would row on the River Donetsk in his home city of Nowy Sacz at an idyllic spot between two bridges. Later, as a young man, he was shocked to discover this tranquil haunt had been a round-up point for Jews during the Holocaust.

“In exactly this place, between the two bridges, the Nazis had concentrated the Jewish citizens. They liquidated the ghetto and they sent them to the railway station and from there to the Belzec extermination camp. For me, it was a shock. It was a place where I was happy, where I had dreams about my career. And then I realised that this same place was the last view for a generation of Jews from my city.”

Popiela began searching for a monument to the Jews, who had comprised almost half of the Nowy Sacz population. He soon learned there was no monument. “There was no place to pray, or to pay tribute.”

He made it his task to memorialise Jews across cities and towns in Poland, founding People, Not Numbers, an initiative that has restored the identities of more than 20,000 Holocaust victims. Next week, a monument bearing 12,000 names will be dedicated in Nowy Sacz. Advised halachically by Poland’s rabbinic authority, the project researches the names of Shoah victims buried in mass graves.

It also engages local high school students to help restore matzevot (tombstones), some of which were found on sides of roads or used as garden pavers. Tending these cemeteries introduces a new generation to the horrific fate of Poland’s Jews.

Restored cemeteries and monuments show young people that Poland’s murdered Jews were not “a stereotype”, said Popiela, but individuals with names, surnames and ages. Each cemetery has an educational plaque detailing pre-WWII Jewish life in Poland. The project also takes students to the Belzec memorial.

In Melbourne and Sydney, he will deliver his oration after the screening of Edge of Light, which follows his work with Polish students restoring cemeteries. For the youth, said Popiela, “it starts a process of thinking – what happened to the Jews in my city, in my village?”