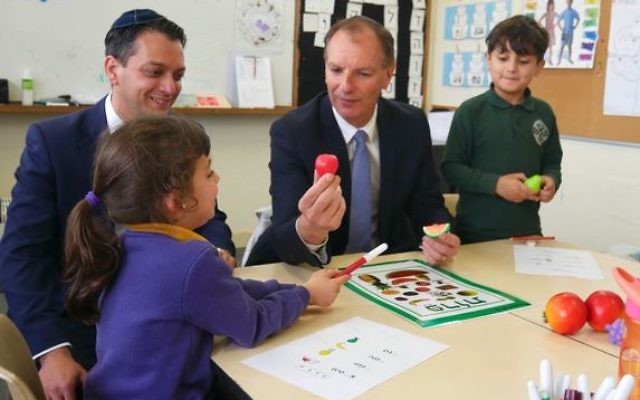 IT smells like election season, with members from both sides of politics pledging hundreds of thousands of dollars to Jewish communal projects and organisations over the past few days.

Kicking it off last week, Member for Southern Metropolitan Region, Philip Dalidakis, announced that Habonim Dror and Sholem Aleichem will receive $199,800 for repairs and amenity improvements to Habo House, including improved fencing, landscaping, internal acoustics and sound suppression within the hall.

The overhaul was one of four Jewish community initiatives which secured more than $400,000 in funding from the Andrews Labor government’s Pick my Project initiative. Yeshivah-Beth Rivkah Colleges received $165,490 to build a multipurpose all-abilities sports field; $26,000 was designated for the purchase of a Lamm Courtesy Bus for Zionism Victoria to provide transport to Beth Weizmann and the Lamm Library; and a further $20,000 was designated to Zionism Victoria to develop a Caulfield Community Garden Project, featuring an easily accessible vegetable garden.

“So many Jewish community organisations and buildings are benefiting from unprecedented levels of funding from the Andrews government, and I’m excited that Habonim Dror, Yeshivah-Beth Rivkah and Zionism Victoria have joined that list this week,” said Labor candidate for Caulfield Sorina Grasso, who visited Habo House to offer her congratulations following the announcement.

Etz Chayim and the United Jewish Education Board (UJEB) have been promised $100,000 respectively, while a subsequent $50,000 has been pledged to both the Moorabbin Hebrew Congregation and Chabad House of Bentleigh. The funds have been earmarked for facility refurbishment at each centre to ensure the communal infrastructure continues to meet the demands of the ever-expanding Jewish population of the locality.

“Having grown up in the area, I understand the value these congregations bring to Bentleigh’s multicultural community,” commented Judah.

His sentiments were echoed by Southwick: “Bentleigh’s congregations service thousands of local Jews with education, seniors programs and charity work and this investment will see these programs expand into the future.”

UJEB operates Merkaz Bentleigh, an after-school multidisciplinary educational centre at the site of Etz Chayim. Over the past three years, the need for UJEB’s services have doubled in Bentleigh.

UJEB’s executive director, Itzik Sztokman, emphasised the importance of UJEB as a gateway to providing primary school children with access to Jewish education in the Bentleigh area, adding, “These capital investments will ensure we have the capacity to grow and continue to offer a comprehensive and quality Jewish education experience.”

The Bentleigh initiatives followed from Guy’s $4.25 million commitment to unlocking sporting grounds within the middle of the Caulfield Racecourse Reserve on Sunday.

The Victorian state election will take place on Saturday, November 24.