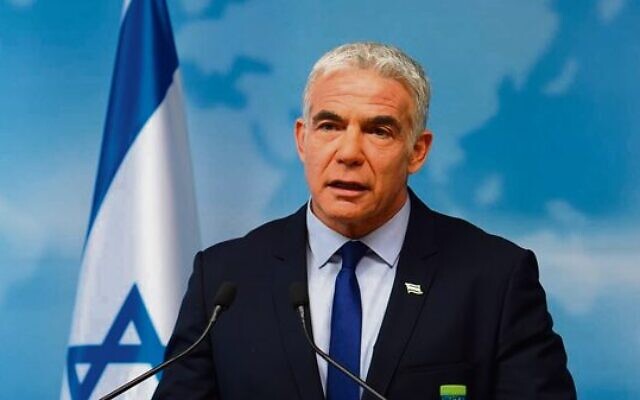 ISRAELI Foreign Minister Yair Lapid spoke to his Ukrainian counterpart Dmytro Kuleba on Tuesday and updated him on Israel’s continued efforts to mediate and provide assistance in the ongoing war in Ukraine.

The conversation was “long and positive,” Lapid said.

The phone call comes after reports that Kuleba had rebuffed appeals from Lapid to connect, purportedly angry over Israel’s carefully balanced support for Ukraine.

“The minister thanked Israel for our mediation efforts and our position on the matter of sanctions,” Lapid tweeted.

Lapid said he updated Kuleba on the “humanitarian aid that Israel has already sent to Ukraine and on the field hospital that Israel is sending.”

He added that “Kuleba also welcomed our policy for absorbing refugees,” and that both ministers agreed to stay in touch.

It comes after Lapid vowed on Monday that “Israel will not be a route to bypass sanctions imposed on Russia by the United States and other Western countries”.

Israel will also establish a field hospital in western Ukraine, which is expected to treat around 100 patients a day.

On Sunday, 29-year-old Serafim Sabaranskiy, a proud Jew and active Hillel member in Kharkiv who enlisted to help defend Ukraine a day before the Russian invasion, was killed when a Russian missile landed near his position.

As the war continues, more than 40,000 Syrians have also reportedly enlisted to join Russia in the fighting.