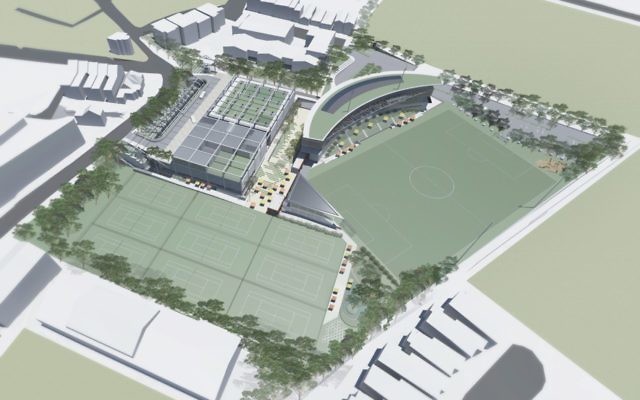 An artist's impression of how the site will look once completed.

HAKOAH Club’s plan to develop White City has been given a boost, with Woollahra Council resolving to defer any heritage listing proposal for the site while it considers Hakoah’s development application (DA).

Council’s decision, adopted by a vote of 8-2, effectively means the heritage issue will be reviewed in conjunction with the DA, which contains significant elements to address heritage concerns over the site.

Previously Council had resolved to defer action for three months on a report that had recommended heritage listing the entire site, to allow Hakoah time to work through the issues.

“Considering heritage at White City in isolation could have had the potential to impede development of the site by anyone,” Hakoah president George Farkas told The AJN.

“That would allow our development while at the same time celebrating the history and heritage of the site.”

Council staff working on the DA conducted a site visit to White City late last month, where Farkas outlined Hakoah’s history, community involvement over the years and its proposals for the site, while architect Michael Mandl gave a presentation of the plans.

Hakoah had previously negotiated with the Council that just three heritage items – the grandstand trusses, arches and front gates – would be retained in the redevelopment.

In June this year the report commissioned by the Department of Planning recommended that the entire site be heritage listed. With its heritage consultant Stephen Davies, Hakoah then formulated its heritage interpretation strategy.

As part of its efforts to engage with the local community, Hakoah also recently conducted briefings for the Paddington Society and local residents. “The general consensus from our consultation meetings was positive, with attendees seeing the benefit of not only revitalising White City but also Hakoah providing much-needed sporting, recreational and social facilities,” Farkas said.

Individual briefings are also being scheduled for politicians, local schools and community groups.

The DA is scheduled for presentation to Council’s Development Control Committee on December 7.