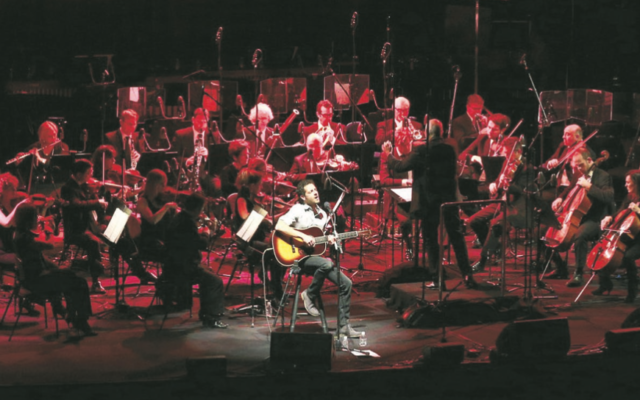 Singer Lior came out of a year-long lockdown with a performance of one of his favourite compositions, Compassion, featuring the High Holy Days hymn Avinu Malkeinu.

Lior and the 54-piece Adelaide Symphony conducted by Nigel Westlake performed the work on the opening night of the WOMADelaide festival in the South Australian capital. By coincidence, Compassion was the last show the Israeli-born, Melbourne-based artist performed before COVID-19 brought a halt to live performances – that show was staged in New Zealand as part of the one-year commemoration of the Christchurch massacre which killed 51 people.

The inspiration for Compassion grew out of Lior singing Avinu Malkeinu (Our Father, Our King) in a cappella style at his concerts.

“I used to perform Avinu Malkeinu to non-Jewish audiences and remember people commenting that they had heard something that was old, sacred and spiritual, even though they did not understand the words,” he told The AJN.

That was when I got a sense of affirmation that something that lives in beautiful music does not always need to be understood in order to be felt.

After watching Lior perform Avinu Malkeinu in concert, Westlake suggested they turn the a cappella song into an orchestral number. “When we presented a seven-minute version to the Sydney Symphony, they offered us a full commission for a 45-minute work, so I was faced with the exciting challenge of expanding it into a symphonic song cycle for voice and orchestra,” Lior recalled. “I could have easily gone to the next step of collecting other similar Jewish texts, but that would be only looking at it through a Jewish lens and I wanted a more universal approach. So I looked at the world of Islam for something with a similar message and we ended up with a blueprint for Compassion, based on the common ground of compassion from these two ancient religions, and it grew from there.”

Compassion premiered in 2013 at the Sydney Opera House in a performance with the Sydney Symphony Orchestra which was recorded and released as an album. It won the 2014 ARIA for Best Classical Album. “I’ve been fortunate enough to perform Compassion with all the major state orchestras in Australia over the years and also with international orchestras,” said Lior. He was excited about returning to Adelaide to perform Compassion with Westlake and the Adelaide Symphony at the scaled-down COVID-safe WOMADelaide festival.

It was Lior’s third time at WOMADelaide, including a performance of Compassion there in 2014, and it was his first performance since this dry period of no gigs.

“I know that a very small number in the audience for Compassion would understand Hebrew or Arabic, but there is a certain sacredness to the music that is enough for a lot of people. It is something sacred and spiritual that resonates in a powerful way, but for people who want to dive deeper into the texts they are printed on the program or the CD.”

Lior, his wife Melanie and two children faced COVID-19 lockdown at home in Melbourne. “Without live performances, I decided to focus on other things and look on it as a period of an enforced sabbatical,” he said. Lior, who received a Sidney Myer Creative Fellowship in 2019 valued at $160,000, started researching a project that pays tribute to Aboriginal activist William Cooper, who led a protest to the German consulate in Melbourne in 1938 just weeks after Kristallnacht.

In Germany on November 9-10, 1938, Jewish businesses, synagogues, houses and schools were destroyed, dozens of people were killed and 30,000 men were arrested by the Nazis and sent to concentration camps. “Cooper’s story has always fascinated me and I’m looking at it as a sister piece to Compassion, as Cooper’s actions were the embodiment of compassion.”