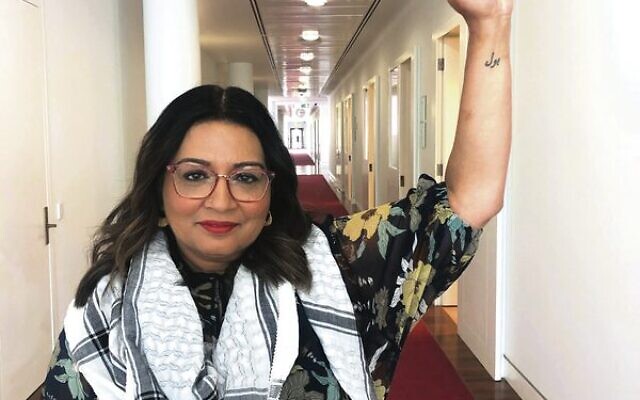 The Australian Greens are expected to play a significant role in the federal election, so it is important to examine some of the extremist rhetoric coming from the party.

This parliamentary term, the Greens policy of opposing boycotts of Israel – established in 2010 and reiterated by the party’s leaders in 2012 and 2015 – seems to have been effectively discarded, albeit without any formal change to the published official party platform.

While claiming it to be a peaceful movement aimed at ending Israel’s “occupation”, leaders of the boycott, divestment and sanctions (BDS) movement have publicly acknowledged their campaign is actually intended to end Israel’s existence. Moreover, the movement’s tactics frequently lead to discrimination against Israelis, and against Jews who support Israel’s right to exist as a Jewish homeland.

The movement inspired a fringe group of Palestinian activists to bully performers into withdrawing from this year’s Sydney Festival due to Israeli Embassy sponsorship for a dance performance.

On January 10, Greens Senator Mehreen Faruqi tweeted, “My full support to the courageous artists who have withdrawn from @sydney_festival due to its partnership with the Israeli Embassy … Solidarity with everyone standing against artwashing apartheid. Justice for Palestine!”

This tweet looks very much like support for BDS – but to AIJAC’s knowledge, Faruqi was not disciplined or reprimanded for expressing a view contrary to party policy.

Moreover, as far as AIJAC has determined, nobody has sought to put any distance between the Australian Greens and its grassroots group, Greens NSW for Palestine, after the latter shared posts praising the boycott. Nor did the Australian Greens sanction Greens NSW for Palestine over Facebook posts asking followers to sign petitions calling for a ban in Australia on the import of “settlement goods and services”, and calling for an end to a partnership between the University of Technology Sydney and Haifa’s Technion.

Meanwhile, on May 16, 2021, the Greens National Conference passed a resolution demanding the Australian government “halt military cooperation and military trade with Israel”.

This came as the ink was still drying on a ceasefire that ended the May 2021 conflict between Israel and Hamas in Gaza. That conflict, was “sparked by injustice and Israeli government policies in Jerusalem”, according to Rice.

This is, to be blunt, bogus. There is an ongoing messy private legal dispute over a small number of properties in east Jerusalem’s Sheikh Jarrah neighbourhood, but to try to spread the notion that Hamas, supported by its benefactor Iran, had no role in provoking the 11-day conflict is factually indefensible.

It misses entirely the fact that Palestinian leadership had been inciting violence for weeks, that Palestinians had planned and carried out violent riots at the Al-Aqsa Mosque – and that the military conflict started when Hamas committed the war crime of firing dozens of missiles at civilian targets inside Israel on May 10.

Indeed, in all the material AIJAC has examined from Greens parliamentarians and supporter groups during and after that conflict, there is no mention of Hamas.

Hamas fired more than 4000 rockets into Israel, and was responsible for not only 12 Israeli deaths, but many more Gazan deaths due to misfiring rockets and the group’s penchant for co-locating military facilities in residential neighbourhoods. Yet the closest the Greens came to mentioning Hamas and its blatantly illegal tactics was a nebulous reference to “opposition to any violence … which impacts innocent civilians” in the 2021 National Conference Resolution.

Faruqi, who rallied and made multiple speeches supporting the Palestinians, closed out 2021 by insisting that people like her are silenced.

“The ultimate taboo in Australian politics is to talk about the human rights of the Palestinian people,” she told the Senate.

As soon as anyone raises Palestinian human rights, Faruqi claimed, “you are hounded and you are condemned. Shamefully and shamelessly, they try to label you as antisemitic, all designed to shut you up, to silence you.”

Interestingly, Faruqi’s devotion to Palestinian human rights does not appear to extend to condemning Hamas – which violently cracks down against dissenters, arbitrarily arrests journalists, supports honour killings and criminalises homosexuality. Australia is proscribing the entirety of Hamas as a terrorist organisation – a decision not a single Greens MP welcomed or publicly supported.

The Australian public, and especially voters, should take this new radical Greens stance on Israel, boycotts, and the Palestinians into consideration in all interactions with the party.