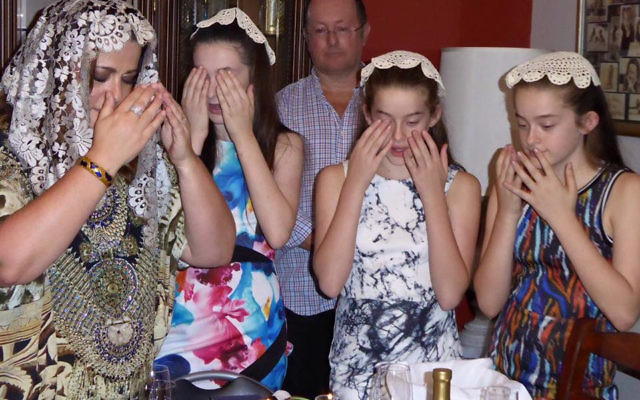 Justine Kuran with her daughters (from left) Marley, Peri and Shaini, and husband Bernie (back).

FOLLOWING a successful pilot in December, Breaking Challah is back, and calling on you to invite non-Jewish guests to your Shabbat dinner on September 9 in a bid to break down barriers and promote tolerance.

The initiative was created by local artist Justine Kuran, who was “bullied mercilessly” at school in Brisbane for being Jewish.

“Recently my (non-Jewish) best friend from school reminded me how she used to come to my home for the occasional Shabbat. Over the years whenever someone mentions Jews in any derogatory way, she talks about her experiences and how open and kind my family were,” Kuran explained of the impetus behind Breaking Challah.

“When we offer this experience to a person, we don’t just shift their mind but the minds of countless others too. The snowball effect lasts for years and has enormous reach,” she enthused.

Last year, approximately 15 families took part, and this year has seen three times that number register so far, with Kuran noting that many more families are still to do so.

“The exciting news is that, so far, we have hosts registered in Australia, the US, Israel, South Africa and Hong Kong,” she said.

Kuran explained that participants don’t need to go beyond what they would do for a normal Shabbat dinner – it’s simply about adding a couple of seats to the table; whether they be filled by neighbours, friends, or colleagues.

Among the guests at Kuran’s Shabbat table will be federal member for Goldstein Tim Wilson and Victorian Shadow Minister for Arts and Culture Heidi Victoria.

After December’s pilot, the NSW Jewish Board of Deputies, the Queensland Jewish Board of Deputies and the Jewish Museum of Australia (JMA) have come on board as cultural partners. This is in addition to three official ambassadors: TV presenter and Breaking Challah co-founder Henry Roth, jeweller and philanthropist Tanya Hamersfeld, and pastry chef Pierrick Boyer.

“We applaud the goal of Breaking Challah – to invite members of the wider community into Jewish homes in order to break down barriers and build bridges. This is a simple yet vital project,” said JBOD CEO Vic Alhadeff.

Director and CEO of the JMA Rebecca Forgasz will host colleagues from the Multicultural Museums of Victoria Network at her own dinner.

“Breaking Challah is a wonderful example of how we can build bridges, share culture and promote understanding and respect, she said. “It is an initiative that is ingenious in its simplicity, and has real substance and soul.”

To register as a host, visit www.breakingchallah.com.