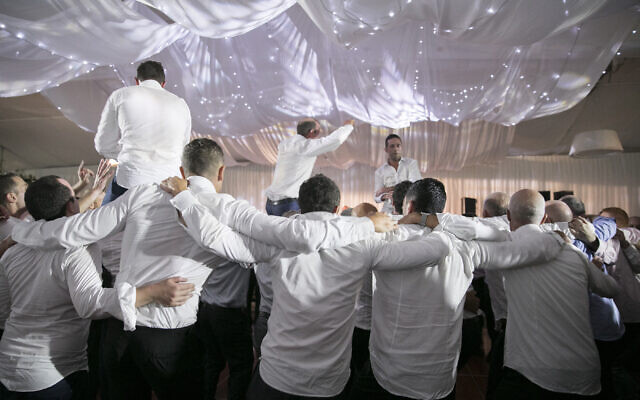 It may be a while before Jewish weddings are again celebrated in the traditional way. Photo: Nadine Saacks

MEMBERS of the Jewish community succumbing to COVID-19 is a “reality we need to face”, NSW Jewish Board of Deputies president Lesli Berger warned this week.

Doctors, rabbinical and community leaders in Sydney and Melbourne have stood united over the last week to reiterate the importance of social distancing in preventing the spread of coronavirus.

Federal MP Josh Burns said on Thursday the vast majority of the Jewish community have been doing the right thing, but “anyone doing the wrong thing faces serious penalties and will be shut down”.

Federal MP Josh Burns has stressed that no minyan is more important than the health and safety of our community, after…

“There are no exemptions being granted to any religious organisations,” Burns said.

“This is about the health and safety of our entire community and the entire nation. No minyan is more important than that.”

His comments come after footage emerged on Wednesday night of a group of ultra-Orthodox individuals in Melbourne attending a makeshift minyan.

Adass Israel Congregation president Benjamin Koppel told The AJN on Thursday, “The Adass community has nothing to do with the individuals shown in the videos widely circulated. They are former members of Adass who formed a breakaway community over a year ago.

“Rabbi [Shlomo] Kohn has spoken strongly and widely with the Adass community, declaring the imperative that all minyanim should be cancelled during this time. He was appalled to see this gathering.”

Meanwhile, in a video released to the community today (Thursday), Berger expressed his concern that “many members of our community will succumb” to COVID-19, the disease caused by the SARS-CoV-2 virus.

“I need to be honest with you. I know it is scary, but it is a reality that we need to face, and we need to work together, to try to solve,” he said.

Members of the Jewish community succumbing to COVID-19 is a “reality we need to face”, NSW Jewish Board of Deputies…

Berger implored members of the community to maintain social distancing.

“Try to limit your interactions just to your own children and you, and do not allow their grandparents to spend time with them [children],” he said.

“I know it is difficult, and something that is very painful because it goes against all of our normal cultural and religious practices. But we need to do it to save lives.”

With Sydney and Melbourne’s Jewish day schools now offering learning via online platforms, Berger said children at home should not be allowed to leave, as “that defeats the entire purpose of what we are trying to achieve by closing schools and moving towards an online-based education”.

But in a message of hope, he spoke of the community’s resilience.

“Our community has faced atrocities, the likes of which are difficult to comprehend. And this is the first challenge of this generation, and we will overcome it together,” he said.

The AJN understands a number of members of Sydney’s Jewish community have already been diagnosed with the virus.

In further advice from the Sydney Beth Din, "anyone who has returned from Melbourne has the halachic imperative to self-isolate for fourteen days from the day of their return as if they had been overseas".

You can read the full advice below. pic.twitter.com/u7vjstmAtR

Last Friday, the Sydney Beth Din released a statement in the wake of a third confirmed case in Melbourne’s Yeshivah-Beth Rivkah College community advising that “anyone who has returned from Melbourne has the halachic imperative to self-isolate for 14 days from the day of their return as if they had been overseas”.

“We implore every member of the community who has returned, particularly those who have been in large crowds at simchas, to behave in a socially responsible manner and self-isolate,” the letter continued.

“In general, our advice for everyone else is to stay at home, work from home, keep your children at home, and when there is a need to venture out, ensure social distancing.”

Several members of Sydney’s Jewish community attended a Jewish wedding at the Pullman Hotel in Albert Park, Melbourne, on Sunday, March 15 and a sheva brachot dinner the following night, at which “a young man was found to have tested positive to COVID-19” afterwards, according to Melbourne doctor Jonathan Pinczower.

“I would consider men at the wedding to be casual contacts, [and] … everyone who was at the Sheva Brochos for at least two hours to be close contacts,” wrote Pinczower.

It is understood that approximately 150 men attended the wedding, while around 30 people were exposed the following night.

Pinczower has also asked COVID-19 contacts to avoid visiting local pharmacies and businesses, and where possible, phone in for assistance, while Australasian Jewish Medical Federation Victoria president Dr Jack Green warned of “breaches in the community which have led to risk of COVID-19 virus spread”.

The Rabbinical Council of Victoria said the body is “distressed and concerned by reports that many young people returning from overseas to our community have not been following the Australian government announcement requiring them to self-quarantine”.

“In addition to following the law of the land, halachah obligates us to follow all directives from the medical authorities in matters of preserving life,” the statement read.

“It is absolutely forbidden to endanger oneself or others. Pikuach nefesh (saving life) overrides almost all mitzvot and considerations.”

Social distancing in the Jewish community

Dr Norman Swan, presenter of the ABC’s Health Report, has a special message for the Australian Jewish community about social distancing – particularly with regard to Pesach.

Meanwhile, Jewish ABC presenter Dr Norman Swan has also issued a video warning in the lead-up to Passover, beseeching community members to “watch your contact”, particularly if over 70 years of age.

“It is only by controlling social distancing that we will control this epidemic,” he said, adding, “As a Jewish community, we need to play our role to protect the common good. That’s something that we as Jews know all too well.”

President of the Executive Council of Australian Jewry Jillian Segal issued a video message to the community on Sunday.

“The Jewish community is uniquely close-knit and interconnected. We are also, on average, an older community. This makes us particularly vulnerable in such times,” said Segal.

She illustrated with examples of big or multi-generational Shabbat dinners, and Pesach seders with extended families and friends.

Segal also called for a temporary end to face-to-face interactions between grandparents and grandchildren; for parents to keep children at home, if not at school; to be mindful of our most vulnerable and ensure they have access to help; and to reach out if individuals are feeling anxious, scared or alone.