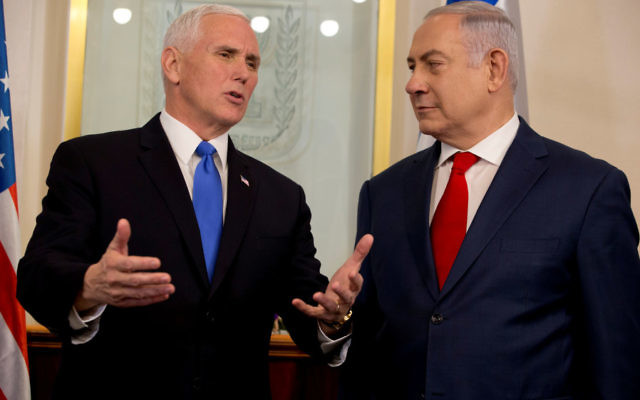 AMERICA’S Vice-President left Israelis overwhelmed and Palestinians seething, as he wrapped up a 48-hour visit to Israel this week.

Mike Pence originally hoped that his trip would be spent talking to both Israelis and Palestinians, and with a heavy focus on the region’s Christians. But Palestinian and Christian leaders refused to meet him, after his boss Donald Trump recognised Jerusalem as Israel’s capital last month.

Palestinian leaders, instead of hosting Pence, called a general strike “in rejection of the US stances against the rights of the Palestinian people”.
The chief Palestinian negotiator, Saeb Erekat, said that Pence has proved that “the US administration is part of the problem rather than the solution”. His Knesset speech was a “gift to extremists”, said Erekat.

This outrage was contrasted by the joy of America’s ambassador to Israel, the rightist Jewish lawyer David Friedman, who was “moved to tears” by the speech, and the happiness of Israel’s President Reuven Rivlin who praised his “strong” and “warm” words.
The mayor of Jerusalem, Nir Barkat, said that he also got teary during Pence’s speech, and celebrated his “unprecedented support of our capital”.

For Prime Minister Benjamin Netanyahu, the Pence visit was a chance to praise the Trump administration, saying that its recognition of Jerusalem would be given a place in Israel’s history alongside the 1917 Balfour Declaration, the Declaration of Independence, and US President Harry S. Truman’s recognition of the state.

Arab-Israeli politicians are so angered by the Trump administration that they started a protest in the Knesset a few seconds after Pence started his speech. The legislators from Joint List noisily waved signs declaring Jerusalem to be the Palestinian capital – until security removed them from the chamber. One of the politicians Ahmed Tibi, a deputy speaker of the Knesset, later defended his protest and called the US administration “crazy and reckless”.

Jewish politicians, including Prime Minister Benjamin Netanyahu, applauded as the protesters were removed, and Likud minister Ze’ev Elkin called the Arab politicians in question “traitors”. Throughout Pence’s visit, Israeli ministers sent out a strong message that they are on the same page as the US administration – and that both are united in condemnation of the current boycott of America by the Palestinian President Mahmoud Abbas, also known as Abu Mazen.

“On peace, I have a message for Abu Mazen,” Netanyahu told diplomats. “There is no alternative to American leadership in the diplomatic process. Whoever is not ready to talk with the Americans about peace does not want peace.”

There was little talk of the Israeli-Palestinian relationship during Pence’s visit, aside from comments made by Pence and his hosts suggesting that Israel is ready to negotiate and it is the Palestinians holding things back.

But there was lots of discussion of the Jerusalem recognition and plans to relocate the US embassy there, of the threat posed by Iran, of global terrorism, of US–Israel ties, and of American reverence for Israel and for Jewish history.

Pence prayed at the Western Wall where he felt “inspired”, and went to Yad Vashem where, according to his guest book inscription, he mourned for six million victims and drew “inspiration from the faith and resilience that rose during such times”.

In the Barack Obama era, Iran was the subject of the biggest clash between Israel and the US administration, but now they are in agreement. Pence stressed that if America’s allies don’t get tougher on Iran, “We will withdraw from the Iran nuclear deal immediately.” Netanyahu was delighted, saying that this matches the Israeli position of “fully fix it or fully nix it”.

Pence didn’t give any indication during his trip of how Trump’s hope for an Israeli–Palestinian peace process can be attained if the Palestinians are refusing to talk to America. The US still has a “deep commitment to peace”. Pence said that Trump “truly believes that the decision the United States has made to recognise Jerusalem as the capital of Israel … will set the table for the opportunity to move forward in meaningful negotiations to achieve a lasting peace and end the decades-long conflict.”

None of the Israeli politicians who addressed Pence pushed him on how the US plans to end the deadlock and restart the peace process. But opposition leader Isaac Herzog gave a stark warning when he addressed Pence in Knesset, trying to warn him away from the common claim of the Israeli right wing that peace attempts are pointless.

“We are in the midst of one of the most complex and complicated periods in the relations between the two nations,” said Herzog. “There is a severe deadlock that we must overcome … and we must try, in every possible way, to create a new horizon of hope. We hope you will not despair and that the President, you and your government will continue to act in every possible way in order to jumpstart a renewed diplomatic process between us and the Palestinians. Millions of people of all religions depend on it and expect it.”

Herzog said that today’s situation is “explosive and sensitive” and that loss of hope is “dangerous”.
He warned Pence, “History teaches us that when there is loss of hope, despair and stagnation, when there is standing water, a murky swamp is created which threatens to drown both nations in it.”