For the first time in more than 30 years, there are growing waiting lists for Israel’s kibbutzim.

The number of people looking to move to a kibbutz, which often have wider spaces and more communal services, began to grow as the COVID-19 pandemic and its restrictions intensified in 2020. But even as life has returned (mostly) to normal, this trend is still going strong, according to the Kibbutz Movement, which represents a majority of Israel’s 279 kibbutzim nationwide.

Ayelet Harris, who leads absorption services for the Kibbutz Movement, told the Times of Israel in a recent interview that the movement has about “500 new members queuing up to join”.

“Many of them are families, but also single people at many different stages of their life. Some have a connection to kibbutz life – maybe they grew up on a kibbutz and moved away – but most of them do not,” said Harris.

From her position overseeing the Kibbutz Movement as a whole, and leading the absorption of new kibbutz members on her home kibbutz of Mevo Hama, Harris believes that the COVID-19 lockdown periods were a major catalyst for moves from the centre of the country to outlying kibbutzim.

“COVID gave these people an opportunity to work from home, and to think about the possibility of moving with their careers to live somewhere else, to find a community of which they could be a part. They want to be away from the cities and they are looking at kibbutzim all across the country,” she said. 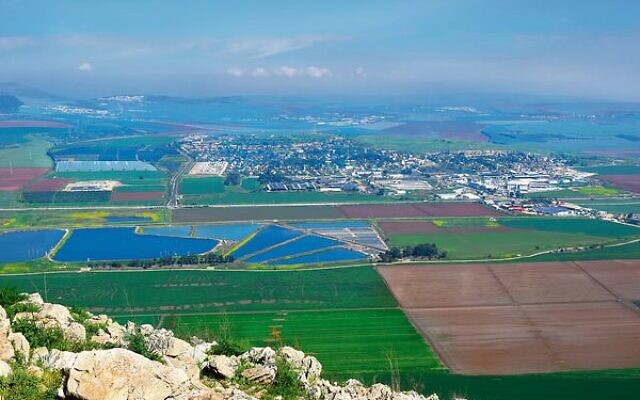 View of the Jezreel Valley from Mount Gilboa in the Lower Galilee.
Photo: Alexirina27000 | Dreamstime.com

The death of the kibbutz ideal is predicted regularly. There have been times when the movement, founded in the early settlement days out of socialist ideology, has been seen as out of touch and out of date, a place for old-time socialists to live out their days. A funding crisis in the 1980s appeared to bang the nails in the coffin of what had been a global experiment in communal living.

But increasingly, there’s new energy to kibbutz life across Israel. And that energy goes both ways.

Kibbutzim themselves have become more open to new members, and more flexible in the ways that they operate. Many have chosen to privatise and to adopt new ways of working. The focus is very much on community, although what that means varies across kibbutzim.

But, as Harris stressed, “It’s not about selecting the best, or the smartest, or the richest people, but it is looking for those who want to become real partners in kibbutz life, to immerse themselves in the community.”

One example of this community immersion is on Kibbutz Lavi, a religious kibbutz in the Galilee, where new residents have been welcomed through a partnership with Kinneret, a regional charity that works with autistic young adults. 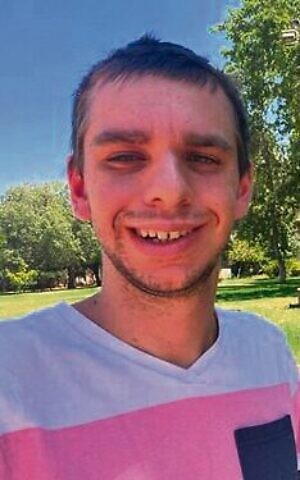 Working with Kibbutz Lavi over the last three years, the charity has converted kibbutz houses into two hostels – Beit Rimon and Beit Zayit – for around 15 autistic dati leumi (modern Orthodox) young men. They are residents rather than members of the kibbutz, but they participate in its religious and cultural life. A number of them work in the kibbutz hotel or furniture factory, and they are fully integrated as members of the diverse kibbutz community.

Naftali Wolfson, 22, was one of the first young adults to move into the Beit Rimon hostel on Kibbutz Lavi. Before that, he lived with his family in the centre of the country and attended a special education high school. This year he undertook a year of national service at a school in Tiberias. And next year, he has plans to start work on the kibbutz itself, with training provided by other kibbutz members.

“Living on the kibbutz has meant that I can be much more independent than when I lived with my parents. People from the kibbutz invite us for meals – we were at the rabbi’s house last Friday night. Often somebody comes round with nice cakes for all of us before Shabbat. It’s very easy to get to know people on the kibbutz and they are very friendly. We celebrate Shabbat and all the holidays with people on the kibbutz, and I even did magic for the kids on the kibbutz over Purim,” he told the Times of Israel.

Becoming part of a kibbutz

The application process for kibbutz membership varies by kibbutz. But usually, would-be kibbutzniks will live on the kibbutz for a year or so before their full membership is brought to a vote.

In that year, they get to experience the realities of kibbutz communal life, and they have the opportunity to demonstrate their commitment and potential contribution to the kibbutz.

Once admitted as members, they are given equal voting rights when it comes to decisions relating to the kibbutz. There are some variations from kibbutz to kibbutz regarding the relationship of new members to existing successful businesses. But most aim for complete equality between members.

“Kibbutzim have become more open to new members and more flexible in the ways that they operate.”

In some cases, it is possible to make a home on a kibbutz without becoming a full member: to live as a long-term resident as part of the community but without the rights that come with kibbutz membership.

On the whole, Harris noted, existing members are eager to welcome newcomers and to bring more people to their communities. But there are, at times, some tensions.

Kibbutz land is owned by the state, and usually, a plot is given to new members to build their homes. And there can be stark differences between those arriving with money and building now, and the veterans whose homes are ageing and were built in a time of more limited resources.

Although most kibbutzim maintain some kind of industry on-site – agriculture, factories, hotels, technology businesses, even stock exchange-listed companies – these represent only a limited part of kibbutz income. These days most members earn their living off the kibbutz, arriving with their own business or career.

On becoming a member, a portion of any income is pooled with the kibbutz, with services and a fixed amount of money going back to each member each month based on family size and needs.

Back in 2014, the Kibbutz Movement conducted a survey to better understand attitudes in Israel towards kibbutzim and found 70 per cent support among the public for using land for kibbutzim, even though most (60 per cent) also believed that their general contribution to society was in decline.

Research during the first COVID-19 wave found that the ethos and values inherent in kibbutzim made them particularly resilient to the challenges presented by the pandemic. 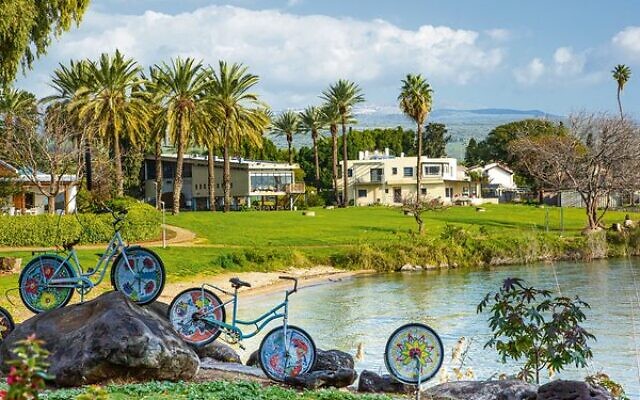 Brightly coloured bicycles permanently parked on rocks by the edge of the sea of Galilee, next to Kibbutz Ginosar. Photo: Oakdalecat | Dreamstime.com

Kibbutz Ketura, in the southern Arava desert close to Eilat, is a good example of how kibbutzim have evolved. Founded in 1973, it has around 165 members; the older members are largely from the United States, and the younger members mostly native Israelis.

Having grown by two to three families a year for some time, that number has doubled since the pandemic, and includes families who are new arrivals to Israel.

The kibbutz has a successful date orchard that was part of its original agricultural business. But it now also runs an educational tourism project and an accounting services business. Some of its members work in the regional school, in local high-tech businesses, renewable energy projects, and as psychologists and actors, but they also run additional in-kibbutz activities – such as kickboxing classes, craft-making, and beer brewing.

Urban kibbutzim (Kibbutz Ironi) have also become a trend. There are just over 100 in Israel, comprising around 2000 members. The idea was tried and failed in the early 20th century, and again in the 1970s. But more recently it seems to have found its feet and become a way to address inner-city social problems. As an example, the Haifa municipality asked youth group members to form an urban kibbutz in the Hadar neighbourhood to work with at-risk children.

But the concept has a looser social configuration than the traditional kibbutz. At Migvan in Sderot, of 100 urban kibbutz members, only around nine are actually pooling funds. Others are part of the community but opt out of full communal living. 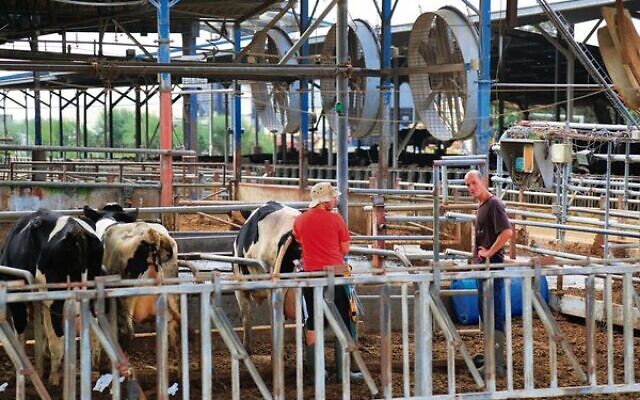 Most Kibbutzim maintain some kind of industry on-site, including agriculture and factories.
Photo: Wing Travelling | Dreamstime.com

Kibbutz living is not for everyone.

Keren Tinman got married on Kibbutz Be’erot Yitzhak in central Israel, which has so far resisted the general move by kibbutzim towards privatisation and greater individuality. Her husband, Shir Amir, grew up on the kibbutz. They started their life together after their chuppah on the kibbutz lawn was lifted up above the crowd by a tractor customised for the process. Most of the friends that Amir grew up with have chosen to live elsewhere but came back for the wedding.

Tinman and Amir live on the kibbutz in a room that is 20 metres square and significantly cheaper than anything they could find elsewhere in the Gush Dan area. They also benefit from subsidised food at the kibbutz supermarket.

“There’s no private space. People on the kibbutz feel that they can access everywhere – even our home. It’s not the regular thing to do but every time we go out we lock the door to make sure nobody comes in. Ideologically the kibbutz is very traditional, and you have to share every part of your life. I feel the people here lack ambition. There’s no incentive to do better because everything is shared,” Tinman told the Times of Israel.

The couple plan to leave for Jerusalem next year.

Tinman and Amir’s reaction may be typical of younger couples. Most of those moving in are families with children. In 2000, some 117,000 people lived on kibbutzim, according to Israeli government figures. By 2021, the Kibbutz Movement’s Nir Meir said, they had a total population that is the largest ever of 182,000.

According to the Kibbutz Movement’s private research that has been shared with the Times of Israel, of those who embark on the one-year trial period that kibbutzim offer, close to 90 per cent “succeed” and integrate into the cultural life of the kibbutz.

These days there is training for both sides of the partnership to try to ensure the success of the relationship. And the absorption of these new members has a positive and dynamic effect on kibbutzim – around 60 per cent of survey respondents believe that the addition of new members has significantly improved the social aspect of kibbutz life.

If there was a time when it seemed like the days of the kibbutz were numbered, and that they would die out with the last of their original inhabitants, those days seem well past.