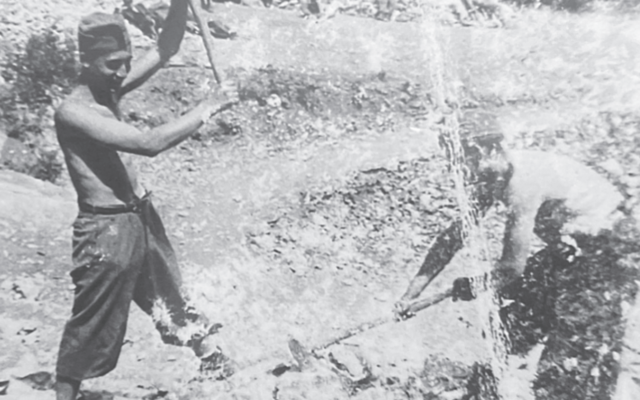 Janine Winkler’s father, Cantor Andre Winkler, in the summer of 1944 digging petroleum tunnels while in a forced labour camp.

This op-ed was originally published on April 19 by the Forward. Get the latest stories from the Forward delivered to you each morning at forward.com/newsletters.

The war crimes that Russian President Vladimir Putin, his generals and his army are committing against Ukrainians – openly and shamelessly raping, torturing and murdering civilians, leaving cities and towns in rubble – are shocking, but to some Holocaust survivors and their descendants, they provoke traumatic memories.

Although I was at first transfixed to the television at images of the atrocities, I now turn away; as more and more horrifying atrocities are exposed, the “second generation” trauma that many children of Holocaust survivors like myself experience has washed over me like dirty water. Who would have ever thought that words such as “the new Auschwitz” or “mobile crematoria” or “filtration camps” would be lifted from World War II history books and transposed into the vernacular of the 21st century.

Yet to compare the atrocities perpetrated by the Nazis to the indiscriminate killing we are now witnessing ascribes both a discipline and competence that has historically been lacking in the Soviet and Russian armies. How Russian soldiers treated Jewish survivors after the war is a subject that is not often discussed. They were not met with the empathy or care shown by their American counterparts.

By some method of intergenerational transference, the initial images of enormous Russian tanks rumbling down peaceful country roads could not help but remind me of the stories my late father told me about his interactions with this so-called “liberating army”.

In 1944, just after Passover, the Germans invaded Hungary, my father’s family was moved into a ghetto and then transported to Auschwitz. My father, like many other young and strong Jewish boys, was forced into a civilian labour battalion under the control of the notorious Hungarian gendarmes.

In the winter of 1944, as the Russians came closer, his labor force was moved towards the German territories to avoid being captured by the Russians. Hungarian command was transferred to the SA, the German Stormtroopers, who forced thousands of Jews, from teenage boys to men in their fifties, to dig wide and deep trenches, sometimes with their bare hands, to stop advancing Russian tanks.

During that time, my father lived day by day. The prisoner labourers knew that at any time the German guards could take them into the forests and shoot them, that their overseers were not answerable to anyone. As with many survivors, some stroke of luck – my father eschewed the word “miracle” as implying a “chosenness” that six million others, including his parents, were denied – allowed him to survive.

On the day he was liberated, my father recalled in an interview, one of the Jewish boys saw a Russian soldier on horseback appear.

“There was such a feeling of hope that this aroused in us,” he said. “We didn’t know what to say after all the hardships we had been through.”

The exhilaration they felt was immediately tempered as my father witnessed a Russian soldier demand a watch from one of the boys. “The Russians were mad about watches,” my father said. “They just took it from him.”

As my father and his friends returned home to search for any family survivors, they knew to sit in dark train carriages as Russian soldiers roamed the aisles fulfilling quotas for boys to take to work in the coal mines of Siberia. My father recalled seeing Jewish boys on their knees, begging not to be taken after being imprisoned by the Germans for four years.

“They couldn’t care less,” my father said. “If they were instructed to take 25 people they would take 25 people, not caring who they were or what they had been through.”

The Soviets were the first to liberate a concentration camp in 1944, Majdanek, and Soviet troops were the first to liberate Auschwitz, in January 1945. The Soviets were unmoved by the horrors they uncovered, according to Lawrence Rees, who produced the BBC documentary Auschwitz: The Nazis And The Final Solution, based on his book of the same name.

“They did horrible things to them,” a woman survivor who witnessed Soviet soldiers raping and killing Jewish woman told him. “Right up to the last minute we couldn’t believe that we were still meant to survive. We thought if we didn’t die of the Germans, we would die of the Russians.”

One story in particular, tucked away in our own family’s history, reverberates in the most disturbing stories we hear from Ukraine, some 75 years later.

My father’s brother had married a young Jewish Slovakian woman during the war. After the war, on a train to her hometown, they were approached by a Russian soldier. The young woman, Suvi, was wearing a gold necklace.

“Apparently a Russian soldier wanted to take that gold chain,” my cousin recounted. Suvi refused. “The soldier pulled out a gun and shot her right in front of my father. Then he opened the door and pushed her out of the train.”

At this moment in history and as my father’s daughter, I cannot just look away. What we are now witnessing echoes in the memories of a shameful past. As difficult as it may be, they once again demand remembering.

“What the Russians did with the Jews after the war was unforgivable,” my father said. “They were animals, not human beings, in my opinion. No one said to them that when you go out looking for workers and meet Jews, you must be good to them because they were persecuted. They figured that anyone who had not been able to resist the Germans, would not resist them.”

Janine Winkler was born and raised in Sydney and now lives in Los Angeles. A version of this column originally appeared at forward.com. The Forward is an independent, non-profit news organisation dedicated to providing incisive coverage of the issues, ideas and institutions that matter to American Jews.