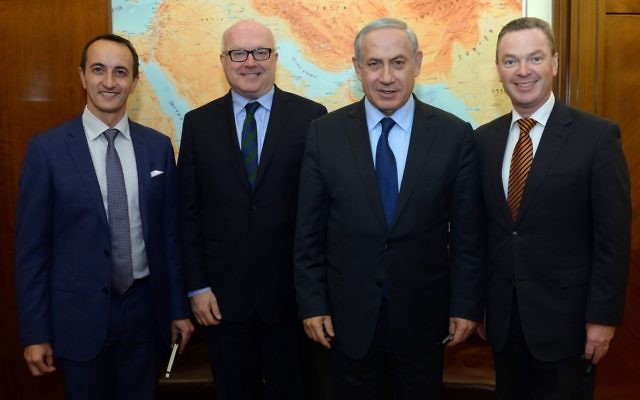 INNOVATION was high on the agenda when government minister Christopher Pyne met with Israeli Prime Minister Benjamin Netanyahu in Jerusalem earlier this week.

“Israel has one of the highest concentrations of innovation and entrepreneurship in the world,” Pyne said.

“Many countries, including Australia, are now looking at what they can learn from Israel’s experience and I hope today’s talks with Prime Minister Netanyahu will help us as we build a reinvigorated Australian economy based on innovation.”

He said the government is proud of its friendship with Israel. “We value the people-to-people links and the commercial and diplomatic ties we share. But we also value our educational and research ties, which have never been more important.

“Israel has a remarkable rate of success in commercialising innovation and turning bright ideas into viable commercial outcomes.”

“Israel owes much of its success to institutions like the Hebrew University of Jerusalem,” he said. “It’s Israel’s number-one ranked university and an institution with a global reputation for outstanding research.”

Prime Minister Malcolm Turnbull told The AJN: “Israel has provided us with an incredible illustration about how the best assets any country has are not its natural resources but its human capital. We have much to learn from the ‘start-up nation’.”

It will provide for a collaborative workspace including office space and meeting rooms for up to two months, as well as accelerated access to business networks, entrepreneurial talent, business development and investment opportunities.

Australia’s Ambassador to Israel Dave Sharma said: “The decision to set up a first Australian start-up incubator in Israel is huge, and reflects the importance that Australia ascribes to Tel Aviv as the world’s start-up capital alongside Silicon Valley.

“This step promises to be a boost to the high-tech and commercial ties between Australia and Israel.”

“Societies based on liberalism and democracy and freedom and respect for the individual are not the rule, they are the exception. It’s what decent and humane societies strive for, but it cannot be taken for granted,” he said.

“It has never been taken for granted by the people of Israel … Your struggle as the custodians of the enlightened values of liberty and the freedom of the individual inspires those who journey across the world to join you for this important conference. On behalf of the Australian delegates I salute you. Your struggle is our struggle too.”