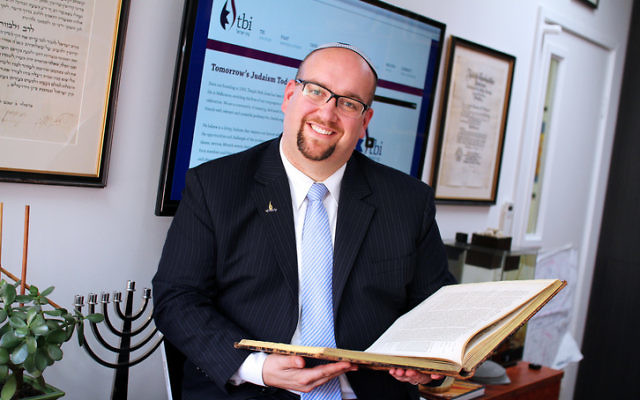 RABBI Gersh Lazarow, senior rabbi at Temple Beth Israel (TBI), has stood down while TBI’s board and the Central Conference of American Rabbis (CCAR), the US-based professional association of Reform and Progressive rabbis, investigate claims he plagiarised sermons, drashes and articles over a number of years.

Supporting the rabbi’s decision, TBI president Joanne Loewy Irons stated to The AJN on Tuesday evening, “This afternoon, Rabbi Lazarow made the decision to stand down. We believe this is the right decision.

“The [TBI] board will now fully review the new claims that recently came to light – in parallel with existing investigative activities into Rabbi Lazarow.

“This is in addition to an external investigation currently being conducted by Rabbi Lazarow’s professional organisation, the Central Conference of American Rabbis.

“We remain committed to personally supporting Rabbi Lazarow through what has undoubtedly been a very difficult period for him. However, the board also has a sacred duty to the congregation to maintain the highest standards of governance and integrity.”

Rabbi Lazarow’s decision to stand down, made shortly after he returned from medical leave, came days after new claims involving 25 alleged incidents of plagiarism dating back to 2012, before his appointment by TBI.

The AJN has learned the latest dossier, an expansion of 16 initial allegations of plagiarism leaked to The AJN last month, was circulated to TBI board members.

The Union for Progressive Judaism (UPJ) this year published that Rabbi Lazarow “wholeheartedly apologises” for misrepresenting a drash by Canada’s Rabbi Eric Grossman as his own, after it appeared in its newsletter under the TBI rabbi’s name.

In an update emailed to TBI members on Tuesday night, Loewy Irons stated when plagiarism allegations were initially made, the TBI board “responded in a proportional manner, believing that the limited number of claims did not, in and of themselves, justify the removal of a valued member of the TBI leadership”.

However, the board was also made aware of a CCAR investigation.

“The CCAR impressed on the board the need for the matter to remain confidential,” Loewy Irons stated. “This significantly limited the board’s ability to communicate with members and conduct a fulsome investigation.

“While the board determined that the CCAR was the appropriate body to test those allegations, we also note that, despite multiple requests to provide a time frame for its investigation, to date none has been provided” and the probe “could take several more months”.

Contacted by The AJN, a CCAR spokesperson in New York this week declined to comment on any investigative activity.

Noting that “as rabbis we must do all that is in our power … to elevate standards of moral behaviour” and “are expected, therefore, to behave at a level worthy of emulation”, the CCAR Code of Ethics states under the heading “Intellectual honesty”, “Rabbis will adhere to the traditional principle of b’shem omro (refraining from plagiarism) and maintaining the integrity of their own credentials.”

Loewy Irons said the latest allegations of plagiarism “are far greater in number than the first set of claims. The board will now fully investigate these new claims in parallel with its existing investigative activities into Rabbi Lazarow, separate to the CCAR process”.

She acknowledged “the board’s approach to this difficult matter has elicited a range of views within our congregation – from support and understanding, to anger and disappointment”.

After the announcement that Rabbi Lazarow was standing down, UPJ co-presidents David Knoll and Brian Samuel stated late on Tuesday night that their organisation “recognises that TBI is managing a sensitive situation and the UPJ will remain supportive of one of its most significant congregations”.

Progressive Judaism Victoria president Philip Bliss noted the state body “sincerely hopes and prays that a resolution will now be found quickly so that healing can begin and broken relations can be restored”.

Before plagiarism allegations surfaced, discord within TBI had led Rabbi Lazarow to publicly resign in June, but he rescinded soon after, telling a TBI forum that month, “In time I pray that I will be forgiven for the hurt that I have caused.”

Rabbi Lazarow was approached for comment, but had not responded by the time The AJN went to press on Wednesday.