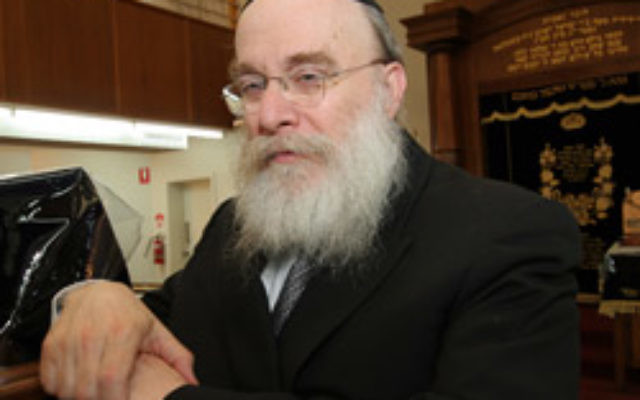 A TOP Melbourne rabbi has come under fire for trying to have a student kicked out of school because his father ignored a rabbinical court.

Rabbi Zvi Hirsch Telsner, from the Yeshivah Centre in Melbourne, and two other rabbis heard a civil matter that related to a business transaction, and found that Sydney businessman Benny Amzalak was in the wrong.

When Amzalak refused to follow the ruling, Rabbi Telsner contacted Sydney’s Kesser Torah College (KTC) and asked them not to educate his children.

Confirming KTC had received the request, school president Meir Moss said it was ignored because KTC would not deny Jewish education to children based on the behaviour of their parents.

Amzalak’s wife Chana said Rabbi Telsner had put her family through hell. “This rabbi put us through torture without any regard to my children or myself,” she told The AJN this week.

“I have never heard of any of this kind of behaviour before.

“If this wasn’t happening to me personally, then I wouldn’t have believed this was really happening at all,” she said.

Rabbi Telsner was contacted by The AJN this week, but did not respond to questions about the incident.

Rabbinical Council of New South Wales president Rabbi Yoram Ulman, who was also a rabbi at the Amzalak hearing, said he had nothing to do with contacting KTC.

Meanwhile, several senior rabbis in Sydney this week commented on the hypocrisy of the case, because Rabbi Telsner and the Yeshivah Centre in Melbourne ignored a Sydney Beth Din ruling last year.

One rabbi told The AJN that Rabbi Telsner’s actions did nothing to help the perception of the religious community from the outside, adding, “I think it would be very tragic to get at a parent through their young children.”

Rabbinical Council of Victoria’s (RCV) president Rabbi Meir Shlomo Kluwgant said, “It is the collective view of the RCV executive that it would be most unfortunate for a child to be thrown out of school or denied a Jewish education due to the behaviour of his/her parent.

“While it is important that parties to a dispute abide by the ruling of a bona-fide din Torah, it is equally important that any sanctions imposed for defaulting on such rulings are legal, appropriate and effective,” Rabbi Kluwgant continued.