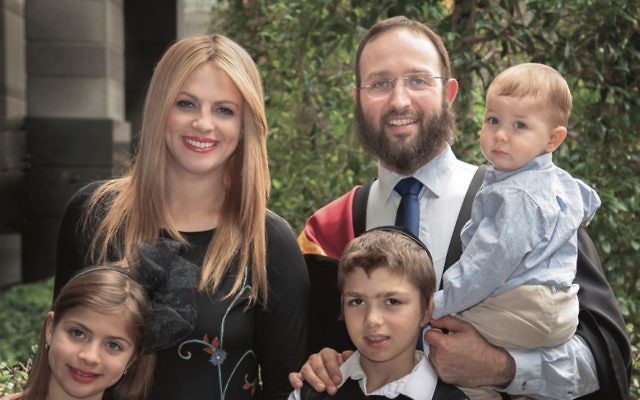 Rabbi Daniel Rabin with his family.

Rabbi Rabin will be overseeing his seventh Rosh Hashanah at the North Eastern Jewish Centre in Doncaster this week, before moving with his family to his new congregation early next year.

“I have mixed emotions because I’m sad to leave my wonderful community but I’m excited because there is a lot of potential and I look forward to this new opportunity,” Rabbi Rabin told The AJN.

He is expected to take up the role at SCHC in February.

“I’ve loved this warm and welcoming community in Doncaster, but when I started they let me know that this is where rabbis learn the ropes and then go on to different jobs.

“The time is right now because South Caulfield has a lot of eagerness to regrow and build their community.”

SCHC president-elect David Boyar said the appointment is a “massive opportunity for the whole area”.

“He is a quality rabbi with a great outlook and an unbelievable track record of rebuilding a community,” Boyar said. “We have the right guy for the challenging job that we have ahead.”

Boyar said that the board has been conducting an international search for a rabbi for nine months, which included considering candidates from Israel and Sydney.

“Rabbi Rabin has a proven ability to reconnect with a congregation,” Boyar said.

“We can relate our current position to that of the North Eastern shule and there is a huge opportunity for us to grow with the demographics of the area.”

The decision to appoint Rabbi Rabin brings an 18-month saga for the shule to an end.

Early last year it became clear that the shule’s board and community did not want to keep Rabbi Yacov Barber, who had served as the congregation’s rabbi for 27 years.

He and the shule entered into a legal battle, which was eventually resolved earlier this year, paving the way for the board to appoint a new rabbi.

North Eastern Jewish Centre will begin looking for a new rabbi after the high holy days.