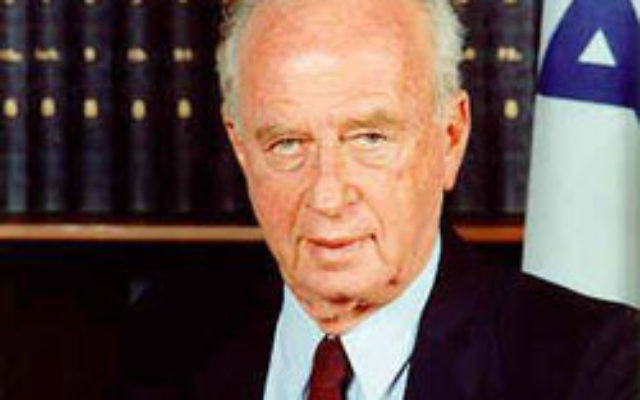 WHEN the life and achievements of the late Israeli Prime Minister Yitzhak Rabin were celebrated on Tuesday night, it was the youth of the Sydney Jewish community leading the commemorations.

Many of the young people involved in the ceremony had not even been born when Rabin was assassinated on November 4, 1995, but all possessed an in-depth knowledge of Rabin’s story and legacy.

More than 150 people attended the event, which was hosted by the Zionist Council of NSW (ZCNSW).

He said Rabin’s legacy and message of “peace between two peoples” was best secured if future generations were educated about Rabin’s life and work.

Rabin was born in Jerusalem in British Mandate Palestine in 1922 to third wave Aliyah parents from Europe and his two terms as Prime Minister of the Jewish state, from 1974-1977 and 1992-1995.

Rabin’s work in the groundbreaking 1993 Oslo Accords, for which he was awarded the Nobel Peace Prize, was discussed, as was his assassination by right-wing Zionist extremist Yigal Amir.

Students also detailed Rabin’s 27 years in the military, including his “exemplary service” during the Arab-Israeli War of 1948 and the Six-Day War. Rabin rose to the rank of chief of staff of the IDF, a position he held from 1964 until his retirement in 1968.

The 1976 rescue operation Operation Entebbe, ordered by PM Rabin, was upheld as a mjaor achievement by students.

The annual memorial rallies held in Tel Aviv’s Rabin Square in Rabin’s honour were presented by Habonim Dror members as a reflection of Rabin’s dream of peace.

“Rabin was determined to create a land of peace and what he represents lives on,” Habonim Dror members said.

“We must continue what he started and defend the democratic foundations of the state of Israel.”