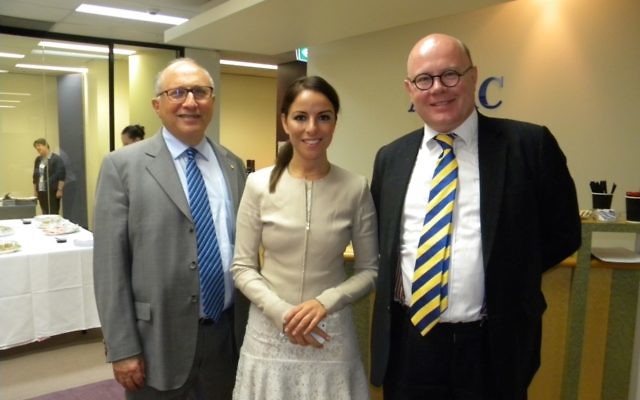 Sharri Markson, special features reporter for The Australian, and James Campbell, state politics editor of the Herald Sun, both addressed the event.

Markson related her firsthand account of televised incitement the group inadvertently viewed on a screen when they stopped for lunch at a shwarma shop in Bethlehem.

She said that she found Israel to be an eye-opening experience as a journalist, but also discovered a deep emotional awakening inside her as an Australian Jew while visiting the Western Wall for the first time.

Campbell told the gathering that he especially enjoyed the wide range of views he was exposed to on the trip. He reflected that meetings arranged between the group and Palestinian Authority officials in Ramallah helped him better understand the Israeli, as well as the Palestinian, positions.

Smith told the forum that while he came into his visit already supportive of Israel, he had returned even more so after spending time in the country.

The other two AIJAC participants on the mission were Aaron Patrick, deputy editor of the Australian Financial Review and Alan Dupont, professor of international security at the University of NSW and a regular contributor to The Australian.

Both Patrick and Dupont addressed an AIJAC luncheon briefing in Sydney on their experiences, with Patrick highlighting the visit to Yad Vashem as a particularly meaningful part of the trip.

The AIJAC-invited participants were joined in Israel by a delegation sponsored by the NSW Jewish Board of Deputies (JBOD), which included David Lipson of Sky News, Bevan Shields from The Sydney Morning Herald and The Age, Ben English from The Daily Telegraph and Alex Hart from Channel 7, and joined by JBOD CEO Vic Alhadeff.