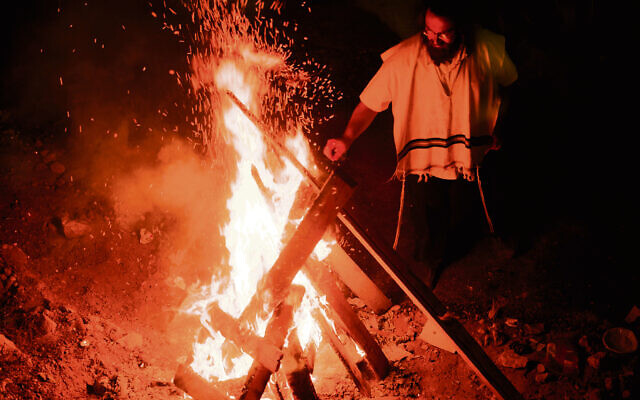 A bonfire during Lag b'Omer at Rabbi Shimon Bar Yochai's tomb in Meron.

Lag b’Omer is popularly associated with Rabbi Shimon bar Yochai – Rashbi. Whether or not he actually wrote the Zohar as we know it Kabbalah and Rashbi are inseparably intertwined. And despite the views of certain great rabbinic luminaries including the Chasam Sofer who was not in favour of a newly created festival not known to the Sages such as Lag b’Omer, it is entrenched as such in our calendar.

But leaving aside mystical actions and teachings attributed to him in the Zohar, what do we know of him from sources such as the Talmud?

We know that he spent a total of 13 years hiding in a cave. But why? The Talmud (Shabbat 33b) reports how Rabbi Shimon bar Yochai came to be set apart as an “enemy of the state” by the Roman governor.  One day, Rabbi Yehuda bar Ilai, Rabbi Yossi, and Rabbi Shimon were sitting together. Yehuda ben Geirim joined them.  Rabbi Yehuda said: “Look what fine projects this nation undertakes. They built marketplaces, bridges and bathhouses.”

Yehuda ben Geirim went and told his family what Rabbi Shimon had said. Word spread from one person to another, and reached the ears of the governor, who declared: “Rabbi Yehuda, who praised the Romans, will be promoted to chief spokesman everywhere. Rabbi Yossi, who remained silent, will be exiled to Tzipori. And Rabbi Shimon, who spoke against us, will be executed.” Accordingly Rabbi Shimon and his son fled and after a series of unsuccessful attempts to hide finally spent 12 years in the cave before exiting – but unable to face the physical rather than spiritual world outside their cave, were then forced to spend a further year therein.

The point of the story is not just that Rabbi Shimon disliked the Romans. The key matter is that in this case as in so many others, Rabbi Shimon saw beneath the facade, he looked beneath the surface. As the mystics of whom he was one delve into the depths of Torah teachings way beyond what may appear obvious, so too in worldly matters also, Rabbi Shimon went beneath the mask of reality under Roman rule.

Having exited the cave even after the 13th year, they still could not contemplate that people sought livelihoods through ordinary means. But then Rabbi Shimon saw an old man running on a Friday afternoon carrying two bunches of myrtle twigs. He stopped the man and asked him the purpose of his actions. The man answered he was carrying the fragrant myrtles to honour Shabbat. Asked why two bundles he answered that they reflected the two aspects of Shabbat as per the two versions of the Ten Commandments; “Zachor v’shamor – Remember it and guard it”.

Halachah takes these expressions to reflect the positive and negative sides of the mitzvah of keeping Shabbat. This appealed to Rabbi Shimon who now said to his son how beloved are the mitzvot to Israel (even those not totally immersed in spirituality) that they celebrate each nuance separately. In this instance we find Rabbi Shimon appreciating one who went beneath the obvious to celebrate depth of meaning.

Nevertheless the most striking presentation of Rabbi Shimon’s world view is to be found in a Talmudic passage in Berachot (35b). For despite appreciating all who carried out Torah precepts he still had strong views regarding priorities that would have been based in a mystical rather than purely rational approach to life.

“The Sages taught: What is the meaning of that which the verse states: ‘And you shall gather your grain’ (Devarim 11:14, in the second paragraph of the Shema we recite twice daily)”. And they answer: “Because it is stated: ‘This Torah shall not depart from your mouths, and you shall contemplate it day and night (Joshua 1:8)’, I might have thought that these matters are to be understood as they are written” – one is to literally spend his days immersed exclusively in Torah study. “Therefore, the verse states: ‘And you shall gather your grain, (your wine and your oil)’– implying a biblical mandate to set aside time not only for Torah, but also for work. This view is attributed to Rabbi Yishmael.”

However Rabbi Shimon bar Yochai cannot accept that attitude. He says: “Is it possible that a person ploughs in the ploughing season, sows in the sowing season, harvests in the harvest season, threshes in the threshing season … (If he so does) what will become of Torah?’ Rather, he opines, ‘one must dedicate oneself exclusively to Torah at the expense of other endeavours. For when Israel performs God’s will, their work is performed by others, as it is stated: ‘And strangers will stand and feed your flocks, and foreigners will be your ploughmen and your vinedressers’ (Isaiah 61:5). When Israel does not perform God’s will, their work is performed by them themselves, as it is stated: ‘And you shall gather your grain’.”

One can see Abaye’s sympathy – the rabbinic practical approach overcame Rabbi Shimon’s vision.This is also clearly evidenced by the passage that follows, in which Abaye’s famous counterpart Rava begged those who would come to his beit midrash to learn not to do so in the busy sowing and harvesting seasons – because if they did so and neglected their farms at those crucial times they would end up concerned for sustenance the whole year through.

Clearly implicit in this rabbinic exchange is not to rely on miracles. Spirituality as far as possible, yes, but total reliance on it – no. Which brings me to say that hopefully compliance with logical precautions will prevent tragedy this Lag b’Omer of the nature of what occurred last year As per the traditional wish, we pray that “Z’chuto yagen alenu – may his merit (and that of the sages) shield us” from sorrow.