Eitan Meyerowitz has always been passionate about inclusivity and the way theatre unites individuals into one cast, one family.

“Everyone has a story to tell. Some are better singers, some better dancers, but at its core, theatre is about sharing stories, not proving talent.”

The Leibler Yavneh College graduate took this passion and ran with it. He’s now the director of Stars and the Moon, a theatrical space providing opportunities for actors of all abilities to perform together on stage. The name, Stars and the Moon, alludes to the beauty of the night sky, incomplete without the stars or the moon shining brightly.

“These individual connections have allowed our cast to become one large family that blurs the lines of who has a disability and who doesn’t.”

Meyerowitz has two passions – working with and including people with disabilities, and theatre. “One of my favourite theatrical experiences is performing in the Purim Spiel with my cousin, Zac Chester, who lives with Down syndrome,” Meyerowitz explained. “We both love the stage, yet there are markedly fewer opportunities for him to participate in serious theatre than those afforded to me. My dream was to create a theatrical experience that allows performers like Zac and myself to share the spotlight, shining on stage equally brightly.”

Meyerowitz refers to it as a ‘castmate system’ where two actors cover one role. Each character is split differently, according to the strengths and weaknesses of the two actors. 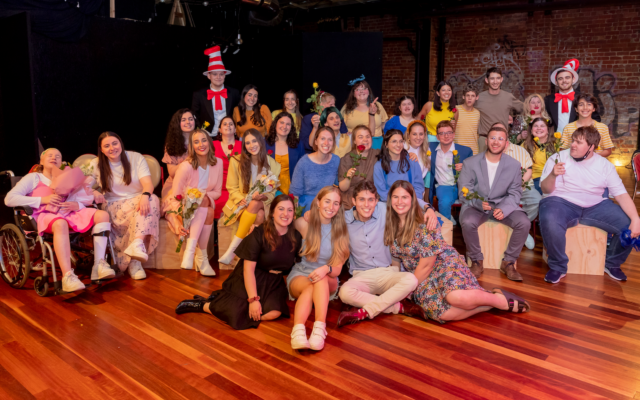 Full cast of Seussical the Musical

“Our company is all about integrating the lives of people with and without disabilities, and having two actors go through the intimate experience of sharing a role; they are forced to learn about one another, how to support one another and inevitably form deep bonds,” Meyerowitz explained. “These individual connections have allowed our cast to become one large family that blurs the lines of who has a disability and who doesn’t.”

Stars and the Moon will be taking to the stage to perform The SpongeBob Musical, an inclusical and the company’s first production following the cancellation of Seussical the Inclusical last year. Seussical became a one-night-only showcase for family and friends post-lockdown so the cast still had the opportunity to show their hard work.

“Our mission is to create outstanding theatre. Not ‘despite’, or ‘given’ the disabilities of our cast, but through our diversity, dedication and the polish of our productions.”

SpongeBob is the musical adaptation of everyone’s favourite sea sponge as SpongeBob and the town of Bikini Bottom face the total annihilation of their undersea world.

“We wanted to choose a show with a message that reflects our company’s values – The SpongeBob Musical does just that,” Meyerowitz explained. “The hero of our story is a simple sponge who is cruelly underestimated by his peers. Nonetheless, SpongeBob prevails through his unrelenting optimism and moral courage. This story of heroism despite perceived inability, makes it the perfect choice for the Stars and the Moon stage.” 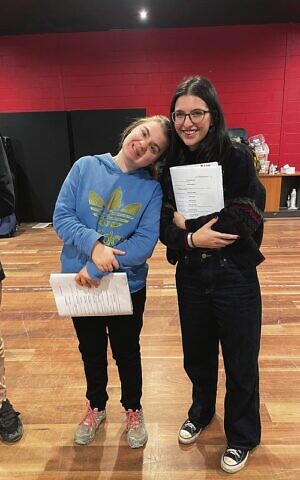 Alice Johnson and Rebecca Abramowitch, playing the role of Pearl.

Explaining that audiences will be treated to a colourful, heartwarming show that includes a score written by some of the biggest names in pop, rock and musical theatre – John Legend, David Bowie, Cyndi Lauper, Panic! at the Disco, Sarah Bareilles, Aerosmith and more – Meyerowitz said the The SpongeBob Musical is ultimately about friendship.

“This story of friendship is retold in the journeys and camaraderie of the 23 pairs of castmates. We hope that these stories impress upon our audiences the importance of connection, laughter and play,” he said.

“Our mission is to create outstanding theatre. Not ‘despite’, or ‘given’ the disabilities of our cast, but through our diversity, dedication and the polish of our productions. [It’s] a unique theatrical experience that celebrates, harnesses and reflects the spectrum of abilities in our community. We hope our message of inclusion inspires our audiences to help make our community fairer, kinder and more accessible for all.”

What Meyerowitz loves is how everyone in the cast supports and cares for each other. “You may expect that the people without disabilities would be helping those with disabilities throughout this experience,” he said. “However, it has often been the other way round. We have seen many examples of our cast members with disabilities reminding our other cast members of the dance moves or the lyrics, or more importantly, role modelling resilience and optimism when rehearsals have become challenging.”

The hope is that performances will demonstrate to audiences what inclusivity can look like, encouraging them to re-evaluate their perception of the potential of individuals with disabilities. After all, the stars and the moon work together to brighten the night sky.

The SpongeBob Musical will be showing September 18-22 at the Alexander Theatre. For tickets, visit starsandthemoon.org