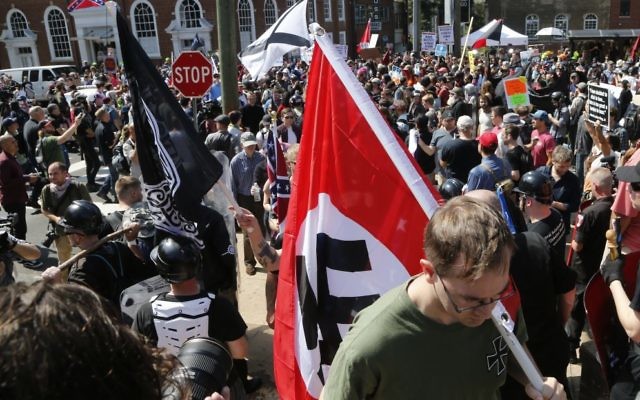 A white supremacist at the rally in Charlottesville. Photo: AP Photo/Steve Helber.

OUR community is justifiably concerned about recent developments within the ALP. The misguided push by some elements, led by Bob Carr, to unilaterally recognise the “State of Palestine” has gained some traction at recent state Labor conferences. Much of the rhetoric emanating from supporters of the Palestinian cause has been inflammatory, including morally offensive comparisons with apartheid South Africa. These decisions will have no bearing on Labor’s foreign policy determined at its 2018 national conference.

There is no stronger supporter of Israel’s right to exist and flourish as the homeland of the Jewish people than Labor leader Bill Shorten. We are indebted to the efforts of tough Labor warriors such as Michael Danby, Mike Kelly, Michael Borowick, Mary and Michael Easson, Philip Dalidakis, Mark Dreyfus and others. The fight is not over, not by a long shot. I will not stand by and watch the party of which I have been a member for two decades, and served as a branch secretary, ministerial adviser and current secretary of Labor’s national policy forum, sink into the swamp of unhinged anti-Israelism. As Luke Walladge wrote on these pages last month, the best means of combating anti-Israel sentiment within Labor is to join the party and fight.

Yet as we wage the necessary struggle for the soul of our nation’s oldest and most distinguished political party, and work towards a peaceful, just and negotiated two-state solution to the Israeli–Palestinian conflict through direct talks between the parties, let us not ignore other, more serious threats to the welfare of Jews in Australia and globally. Which brings us to the violent events at the so-called Unite the Right rally in Charlottesville.

A young, innocent woman, Heather Heyer, was murdered by a neo-Nazi while she was marching against neo-

Much has been of President Donald Trump’s equivocal response. Suffice to say there is no moral equivalence between anti-racism protesters and neo-Nazis. The leader of the free world and president of the country which sacrificed so much to defeat fascism during World War II stands condemned by his reaction. It is sickening to hear the likes of Yair Netanyahu, the son of the Israeli Prime Minister, argue that American left-wing groups are more dangerous than neo-Nazis. The Israeli PM himself, typically passionate and vocal on threats to global Jewry, has said little in response to neo-Nazis attacking the Diaspora’s largest Jewish community. Naftali Bennett to his right and Tzipi Livni to his left have been more outspoken.

Charlottesville is a timely reminder that the real threat to Jews comes as always from the right, notwithstanding its followers’ recent habit of styling themselves “alt-right”. The “alt-right” hate Jews for being Jews. The far-right rally was advertised beforehand on the neo-Nazi website The Daily Stormer as aiming “to end Jewish influence in America”. As services took place at Congregation Temple Beth in Charlottesville, the shule was menaced by men armed with semi-automatic rifles chanting “sieg heil”. Neo-Nazi websites reportedly posted a call to burn the synagogue. We should not kid ourselves that Nazism is a thing of the past. Nor should we tolerate any kind of suggestion that left-wing activism is somehow comparable to the outright anti-Semitism committed by this “alt-right” in the name of the murderous Nazi regime which exterminated six million of our ancestors. Nothing is more evil than that, and no one else is to blame for their actions.

It would be naive to think Australia will be immune to this hatred. Last week anti-Semitic posters were plastered across two elite Melbourne schools. As Jewish Community Council of Victoria President Jennifer Huppert noted, “Domestic neo-Nazis and white supremacists appear to be emboldened by events overseas.” In response to the recent decision to block the building of a synagogue in Bondi, an unholy collection of Islamophobes and a minority of far-right Jews, including Avi Yemini, planned to hold a protest rally. In 2014, one of the far-right instigators, Neil Erikson, was convicted for anti-Semitic harassment of a Melbourne-based rabbi. Yemini defended Erikson initially as a former neo-Nazi who had “reformed”, even though in a leaked message sent from Erikson to former United Patriots Front leader Blair Cottrell, who once declared he wanted a photo of Hitler in every classroom, the two agreed that while demonising Muslims should be a priority, they would “do Jews later”. The day after Charlottesville, Erikson changed his profile picture on Facebook to a photo of James Fields, the man charged with the murder of Heyer, surrounded by eight “smiley face” emojis. He also shared a video of the car repeatedly ramming protesters. Needless to say, these people are no friends of the Jewish people.

None of this is to downplay other threats. Islamic extremism, another totalitarian movement of the far-right is a clear and present danger to all Australians, in particular our community, a threat reinforced by the barbaric murder of innocent civilians in Barcelona. ISIS and its fellow terrorist travellers support a theocratic, racist, misogynistic, homophobic, neo-fascist ideological worldview. Like neo-Nazis they single out Jews and mark us out for death for merely being Jewish.

Then there is the toxic boycott, divestment and sanctions movement. It does not on the whole share the classical, racialised anti-Semitism of these fascistic movements, but it does single out Israel, and demonises Israelis and Diaspora Jews. Its seemingly peaceful, idealistic message is a philosophical smokescreen behind which lies an ugly nationalist agenda: the abolition of the State of Israel and its replacement by an Arab-majority State of Greater Palestine. If successful in its aims, BDS would almost certainly produce the expulsion of most Israeli Jews from our homeland.

These are the real threats to Klal Yisrael, not internal wrangling within a great social democratic party, a fight which I and others have no intention of losing.