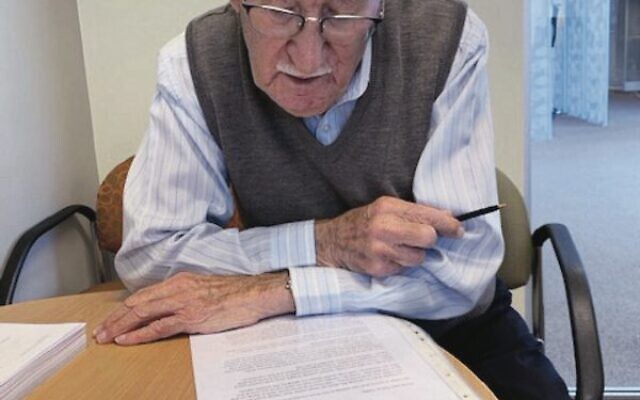 The sun had risen to witness Sydneysiders celebrating their release from lockdown. The day progressed, the sun set, twilight morphed into darkness, just like on any other day. But this was not just any day. It was the day that Eddie Jaku OAM died.

Eddie, 101-year-old Holocaust survivor, hadn’t planned to die any time soon. That’s why he’d bought a new car a year ago and recently renewed his licence. He had much living still to do. He was also on a mission with an urgent message to impart to the many he continued to touch: “As long as I live I’ll teach not to hate.”

And Eddie had every reason to hate. In his award-winning memoir, The Happiest Man on Earth, he told of his harrowing experiences as a young German Jew in war-torn Europe during the Holocaust. His message of hope, kindness and gratitude arrived at a time in which it was sorely needed in our COVID-ravaged reality.

As arguably, the darkest cloud in living memory descended on the people of Europe and in particular us Jews and other minorities, Eddie endured the hell of Buchenwald concentration camp, Auschwitz and finally a Nazi death march from which he incredibly managed to escape, hiding in a forest on a diet of slugs and snails until his rescue in June 1945. With family and friends murdered by the barbaric regime of Adolf Hitler, Eddie miraculously found a way to keep going through a link to his past.

In the midst of the horror Eddie had, by chance or perhaps as it turned out, by fate, discovered a friend from the past, and through the warmth of that human connection he’d found kindness which, in turn had given him faith, hope and the resilience to survive the unimaginable.

After liberation Eddie met his wife to be, Flore, a fellow survivor, and with the birth of their first-born son, Michael, made a conscious decision to move beyond the bitterness which had consumed him. He chose instead to love life, to honour those who had perished by telling their story and to share his message of hope in the midst of darkness, along with a warning of the dangers of intolerance. A message never more relevant than now as we see antisemitism and other religious, racial and ethnic prejudice and hostility escalating around the world.

Eddie made the decision as he held his newborn in his arms, immersed in the joy of the moment, that he was indeed the happiest man on earth, and would dedicate his life to sharing his message.

Having read Eddie’s book and soaking up the abundance of invaluable presentations and interviews this giant of a man had so generously gifted us, I found myself overawed that someone could survive such horror and loss and go on to embrace life, whilst honouring the millions who were denied the chance. I needed to process his story and his message which had moved me so deeply, and so I wrote about it.

Sending my article to Eddie at his Montefiore home in Sydney, together with a letter in which I shared some of my own life story, conveying too how I turn to Shoah survivors for strength during challenging periods; his reply, empathetic and insightful was sent by a caring employee, happy to facilitate from that first contact. The message, from a man of deep humanity who considered all those with whom he crossed paths as friends, regardless of whether they’d ever met, touched me enormously. The accompanying photo of this striking centenarian reading my letter shall remain a treasured possession always.

Since Eddie’s death I’ve chosen, for the moment, to leave his book on my coffee table in my living room. I like to look at his handsome face on the cover as I pass by. It also reminds me of Eddie’s profound teachings and his sage words of wisdom.

As I read the inscription on the back cover, I can hear Eddie’s gentle voice reminding me each day that “life can be beautiful if you make it beautiful. It is up to you.” It’s like my own personal “Inscription of Hope” as with the words discovered on a wall of a cellar in Cologne, Germany where Jews had been hiding from the Nazis during the Holocaust.

Vale dear Eddie. Your legacy will endure for generations and provide inspiration for the thousands of lives you reached.

Janine Joseph is a Melbourne writer.