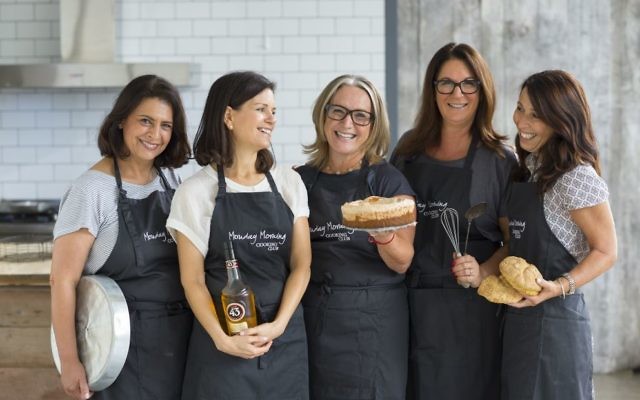 Telling the story of the Jewish community through recipes has been the driving force behind the Monday Morning Cooking Club, which has just launched its latest cookbook. Danny Gocs reports.

WHEN the Monday Morning Cooking Club started working on its first book more than 10 years ago, it focused on recipes from the Sydney community; its second book went further afield, collecting recipes from around Australia; and its latest book, It’s Always About the Food, trawled the globe for recipes.

For the half-a-dozen Sydney food-lovers who started out meeting once a week on Mondays with the goal of sharing recipes from the community, the project has blossomed.

Founding member Lisa Goldberg says: “It has become a full-time project and we love it. Now we meet or are working on it most days of the week.”

While the focus was on ensuring that recipes, often handwritten on paper by elderly members of the community, could be reproduced by readers in their kitchens, the books also raised money for charity.

“We are aiming to hit the $1 million mark in the next year or two,” says Goldberg, noting that WIZO is a major beneficiary of their fundraising as well as supporting a host of charities.

“We consider that as the icing on the cake; our main reason is to preserve recipes and deliver a delicious snapshot of the community.”

The current Monday Morning Cooking Club team comprises original members Goldberg (who started her professional life as a solicitor), Merelyn Chalmers (who has worked in public relations), Natanya Eskin (a former primary school teacher) and Jacqui Israel (also a teacher), and newcomer Lynn Niselow (who has worked as a caterer), who joined in 2014 after Paula Horwitz and Lauren Fink left.

The new book, Monday Morning Cooking Club – It’s Always About the Food, was launched in Sydney last week, with further launches around the country and a Los Angeles launch scheduled for June.

The 320-page book features recipes from members of the Jewish community in cities ranging from New York, Hong Kong and Paris to Mexico City, Johannesburg and Tel Aviv, complemented with stories behind each dish and lavishly illustrated by acclaimed food photographer Alan Benson.

“He is the brother in our sisterhood,” says Goldberg. “Alan is such a talented photographer. He makes the food shine. No one can make gefilte fish look as sexy in a photo as he can!”

There are recipes for dips and breads, soups and salads, main courses including fish and meat, cakes and other desserts.

“It’s a challenging process,” explains Goldberg. “We emailed communal organisations in America and Canada and Britain seeking recipes, but only got a few responses. So we had to work out a different approach to reach people.

“And when we did get responses, they needed to be happy about sharing their special recipes. And because we already had thousands of recipes on hand from the earlier books, we had to ensure that they didn’t double up and could be made in the kitchen without any problems.

“You can imagine our joy every time we found a recipe that successfully went through the whole process and looked great when we made it. There were high fives around the kitchen!”

Chalmers explains about kashrut in the recipes in all the Monday Morning Cooking Club books.

“We don’t say that it is a kosher book, but there is nothing non- kosher in the book,” she says.

“We want the book to have a broad appeal. Anyone who has a memory of food growing up, whether they are Jewish or not, will love this book.”

After an initial hiccup when their first publisher rejected their proposal for Monday Morning Cooking Club – the Food, the Stories, the Sisterhood and it had to be self-published and self-funded, they secured a publishing deal with Harper Collins which republished the first book as well as the subsequent two books, The Feast Goes On and It’s Always About the Food.

“We could go on forever, as we have not nearly reached all the cooks in the world in the Jewish community, but for us we are going to do one more book called Sweet about desserts, which is planned for 2019,” says Goldberg.

“Jewish people like sweets – for every savoury recipe we get five for sweets. We have an incredible collection already to choose from without putting the word out.”

Eskin adds: “What drives us to keep going is to get those recipes written down and into a form that can be reproduced by readers in their kitchens. Often their measurements are their own utensils which don’t translate into proper recipes, so there is a lot of work to ensure that people can use the recipes and recreate it exactly as the original.”