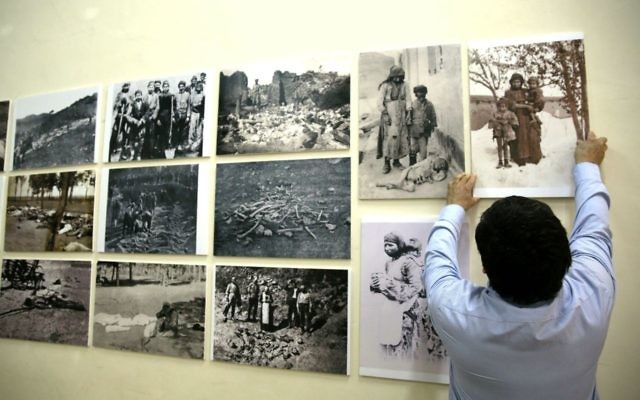 JEWISH communal leaders in Australia this week voiced their support for international recognition of the Armenian genocide, a century after the persecution of Armenians within the Ottoman Empire led to the deaths of well over a million people.

Beginning on April 24, 1915, and spanning a number of years, the Armenians were systematically deported, tortured and killed by Ottoman authorities. Earlier this month, Pope Francis described the atrocities as a “genocide” and called on all heads of states and international organisations to recognise it as such.

In 2013 the NSW Parliament unanimously supported a motion to officially recognise the genocide, but neither Australia nor Israel have taken such steps.

Speaking to The AJN this week, Executive Council of Australian Jewry (ECAJ) president Robert Goot said, “The unspeakable atrocities visited upon those Christian communities and the suffering of those people and the communities that have survived is aggravated by denials and moral equivocations.

“The ECAJ accepts the overwhelming view of history scholars that the slaughter from 1915 to 1923, of more than one million Armenian, Pontian Greek and Assyrians, almost all of them civilians, at the hands of the Ottoman Caliphate was done with genocidal intent.”

The sentiment was echoed by Zionist Federation of Australia president Danny Lamm: “The Armenian genocide should be recognised as just that, a brutal murder of 1.5 million people by the Turks and it is implausible to me that we should still question the reality of that terrible tragedy,” Lamm said.

Australia/Israel & Jewish Affairs Council executive director Dr Colin Rubenstein said it is a moral imperative to condemn the massacres and ethnic cleansing of Armenians, Assyrians, and Pontiac Greeks, Chaldeans and others that began in April, 1915.

“This was organised, systematic murder on a scale clearly encompassed by the definition of genocide with all its unique features and specific victims. It has been identified by many leading scholars as both a tragedy in its own right and as a precursor to later genocides, including the Shoah.

“AIJAC joins with the many governments, human rights advocates and religious and academic figures in calling for these terrible massacres to be condemned but also appropriately commemorated in a way which allows for the modern world to properly honour the memory of the victims, while also promoting progress towards reconciliation.”

At the Sydney commemoration of the genocide this Friday, a message will be read out on behalf of the NSW Jewish Board of Deputies. “Jews the world over are mandated to regard themselves as if each one personally survived the Holocaust. So it is with the Armenian people,” the statement says.

“The importance of understanding the Armenian genocide as a defining moment in history is compounded by the shocking refusal of countries around the world to acknowledge it for what it was.

“More than that, we need to enshrine in our collective memory the crime against humanity which was inflicted on the Armenian people, so as to ensure that it is understood, learnt and transmitted to future generations.”