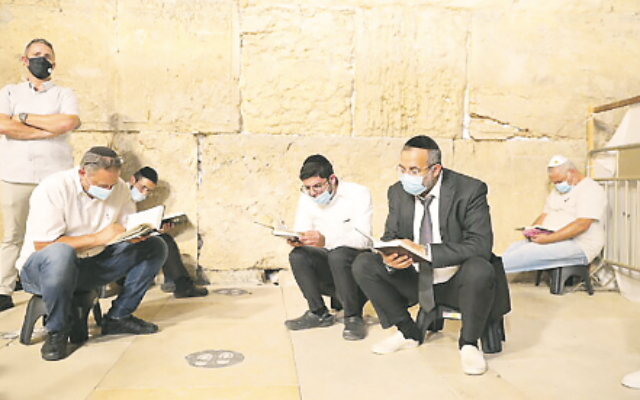 Kinnot during COVID at the Kotel, July 29, 2020. Photo: Olivier Fitoussi/Flash90

This coming Sunday is Tisha b’Av. While it is not unusual to carry out the requirements of that fast on a Sunday there is a difference between this year and most other occasions when this occurs. This year Sunday is actually Av 9 and so we fast; however most years when we fast on the Sunday it is because Av 9 was on Shabbat and the fast was simply deferred to respect and honour Shabbat. The result is that certain technical leniencies that may apply most times when the fast is on Sunday are not applicable this year.

Of all aspects of our liturgy, whether recited thrice daily or once annually, the Kinnot (elegies) of the Tisha b’Av morning service, stand out as the least well known and understood. Unloved and unwanted as the day of Tisha b’Av itself, most editions are not even in a format that belongs in a library.

Tradition has it that as we hope that the messianic advent would soon make them redundant there is no need to print them except in the cheapest manner; little did it matter if flimsy productions would not last a lifetime. (The Lookstein edition with commentary based on the teachings of Rabbi Joseph B Soloveitchik and the Artscroll edition as well as the Rosenfeld Kinnot that preceded them broke with tradition as exceptions to the rule. Educational they are – but hopefully in the future they will serve as repositories of history rather than practical prayer books.)

And beyond that general downplaying of their position among our liturgical treasures, is an attitude to their recitation unparalleled elsewhere. Which Orthodox shule would decide on any other day of the year to omit elements of a prescribed liturgy on an ad hoc basis? Yet many have a policy to recite only the first few and a number of others considered key compositions – a decision largely left to the discretion of the rabbi, chazzan or other individuals. And many who do recite all or some have not studied their meaning, format and inbuilt references in a way that all other aspects of our liturgy are studied so that they are fully understood and able to be recited with proper kavannah (intent presupposing understanding).

What are Kinnot? A series of poems of lamentation that originated between the seventh and 13th centuries, to which some have now added a few Holocaust-related compositions. Primarily concerned with the loss of the Temples and Jerusalem and in many cases replete with biblical refer- ences particularly to Megillat Eichah (the Book of Lamentations read on Tisha b’Av eve), their style and structure varies considerably. As is the case with the piyyutim (poetic insertions) of the Selichot and other festive services, that variation ranges from simple biblical language to complicated and convoluted expressions, the full meaning of which is often difficult to fathom, at least in the first instance. And as whether owing to expectation of imminent redemption that will make them redundant, or perhaps pure laziness – one does not see their study worthwhile, they remain for many a largely closed book.

So here is a brief summary of their content.

Taking the cue from Megillat Eichah, the initial Kinnot written by the seventh century payyetan (poet) Eliezer Kalir begin with the word “eichah”, meaning “how”. Their themes: How does the city remain solitary, how did this happen, how could the anger of the Lord be so provoked? Also by Kalir are pieces beginning “Zechor” – seeking remembrance of the enemy’s deeds that also blasphemed the Holy Name.

Perhaps the most famous Jewish sigh is the Yiddish expression “oy vey”. While it does not appear as such in the Kinnot, a series of them do feature as refrains what are perhaps the original versions preceding the growth of Yiddish: Oy, Oyah, and a full sentence: “Oy meh hayah lanu – Oh what has happened to us.”

Elsewhere we read of Jeremiah’s lament and the 10 martyrs of the Roman era, talmudic sages including Rabbi Akiva executed in the cruellest manner. Zionides, written in the 12th century by Rabbi Yehuda Halevi express his heartfelt longing to return to Jerusalem. Their poignancy is increased by the story that having personally succeeded in making the journey from Spain to Jerusalem he was murdered by a passing horseman as he arrived in the city. His words “Zion halo tishali l’shelom asirayich – Zion will you not ask for the fate of those taken captive” feature in popular Jewish songs.

Another 12th century composition mourns the havoc created by the Crusaders as they pillaged the communities of the Rhine Valley while en route to the Holy Land. Terrible in itself, that tragedy set the pattern for further centuries of Christian persecution that indeed made Jewish exile in Europe almost too terrible to bear.

One other Kinnah of note is that beginning “Sha’ali serufa ba’esh” referring to the Parisian burning of the Talmud about 1242. Further such burnings right to the Nazi era aside, its poignancy increased in recent times for it was written by Rabbi Meir of Rothenburg, who was imprisoned as part of an extortion attempt but forbade the community to ransom him in order not to encourage the taking of other Jewish prisoners for ransom.

Sadly, the halachic and other considerations relating to that event that were tragically considered similarly valid in regard to the Gilad Shalit case, are once again of significance as consideration is given to some sort of prisoner exchange in regard to the bodies of soldiers and two living persons still held captive by Hamas, that seeks to extort whatever it can in exchange for their release.

May all Israel no know no more personal or national tragedy as we reach fulfilment of the last lines of the Kinnot: “For the Lord shall comfort Zion, joy and gladness shall be found in her, thanksgiving and the voice of song.” (Isaiah 5.13).