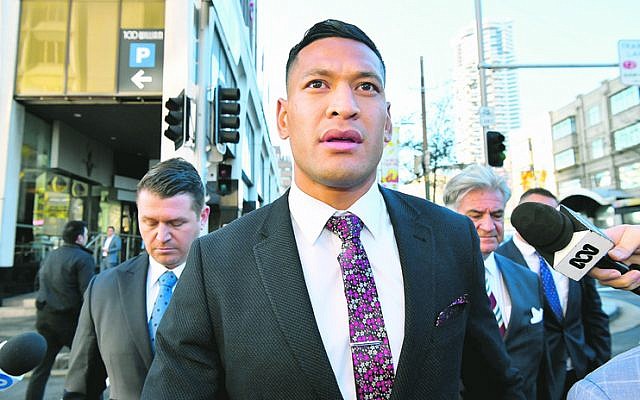 ISRAEL Folau has dominated our headlines over the past weeks. And, like the State of Israel, he is likely to continue to attract attention, heat and passion for the foreseeable future.

He got 73,587 likes on Instagram and his subsequent sacking by Rugby Australia led the Christian Alliance to raise $2.2 million for his legal challenge in a short space of time.

The sacking of Folau has led to a fierce debate focusing on religious freedom and contractual obligation to one’s employer.

Many have argued that this is essentially a legal issue that the courts will need to unravel: Did Folau breach the terms of his contract and Rugby Union’s Code of Conduct which unequivocally states “Treat everyone equally, fairly and with dignity, regardless of gender, gender identity, sexual orientation, ethnicity, cultural or religious background…”

On the other hand, is this more an issue of freedom of speech?

Former Human Rights Commissioner Gillian Triggs has suggested: “My own view, and it is a purely personal view, is that he should be entitled to put his view. I think it is really foolish and disproportionate to prevent him from preaching something that I think he probably believes quite deeply as a matter of religious expression.”

Similarly, leading workplace lawyer Josh Bornstein argues Folau’s case illustrates a dangerous tendency in Australia of employment contracts infringing upon people’s personal liberty. But, he says, if people want to see such speech curtailed they should lobby to have it done by legislation rather than via workplace law. We should not be ceding the regulation of speech to corporations, he argues. He believes that should the case progress as far as the High Court, it might redefine the relationship between employers and employees in Australia.

In my opinion, the issue may well have legal and contractual implications but it also has deep ethical, social and emotional consequences. It raises the question of how we use language and it is this that Gillian Triggs seems to overlook.

Both the parasha a fortnight ago (Shelach) and last week’s Torah reading (Korach) remind us that language is exceedingly powerful, that it can undermine our social order and lead to violence and death.

The opening words of last week’s parasha read, “And Korach son of Kehat, son of Levi took. And Datan and Aviram” (Numbers 16:1). The text doesn’t specify what Korach took, prompting commentator Rashi to say: He won over with flattering words. In other words, he used words to manipulate and exploit others in his bid for power and revolution.

Words are wily, words wound. And Israel Folau’s wild words wound. They fail to discriminate between people who choose to abuse alcohol, steal or cheat on their partner to those who have a different ideology or who have no choice in their sexual orientation. They blur the lines between diversity of opinion and bigotry. Of course, I support and promote freedom of religious expression, but I do not support the freedom to express your opinion in a hateful way.

Freedom of speech has limits: no freedom can ever be absolute. And further, have Folau’s religious freedoms really been compromised by his sacking? He can still voice his opinions about sinners. He should just engage his head more and argue his standpoint in a more respectful and thoughtful manner.

The vindictiveness of Folau’s comments is surely a betrayal of his Christian values of tolerance or at least compassion towards the “enemy” or detractors.

This takes us back to the point that our Torah and his Bible forbids homosexuality. So it is legislated in every Code of Jewish Law. This is not going to change but does this mean that there is no place for the gay individual in Jewish life or for the Orthodox gay individual or couple in the Orthodox community?

It is easy to say – “It’s against the Bible and Judaism, that’s it.” It’s a lot harder to say that to a sincere gay individual, to your son who has come out or to your sister who is living in a gay relationship.

It is intellectually dishonest and morally cowardly to avoid the reality that homosexuality is what Rabbi Chaim Rapoport calls “the formidable challenge” for Orthodoxy today.

It is a fearsome challenge, he asserts, because it brings into question issues of freedom of choice (is homosexuality genetically wired or a matter of conscious choice?) and if some are wired that way how can a caring God demand they go against their nature?

The overwhelming evidence and consensus suggests that homosexuality is not a choice. I for one, agree with a lot of (if not most) gay people who contend that they would not willingly choose to swim against the tide of heterosexuality, to be different, to carry a double burden of Jewishness and gayness.

Rabbi Shlomo Riskin puts it this way: “How can we deny a human being the expression of his physical and psychic being? If there is a problem with the kettle, blame the manufacturer. Is it not cruel to condemn an individual from that which his biological and genetic make-up demand that he do? The traditional Jewish response would be that if indeed the individual is acting out of compulsion (‘ones סנוא‘) he would not be held culpable for his act.”

The ground-breaking document issued by Chief Rabbi Ephraim Mirvis in September 2018 entitled “The Wellbeing of LGBT+ Pupils: A Guide for Orthodox Jewish Schools” recognises the reality of young lesbian, gay, bisexual and transgender students in our schools.

Explaining his rationale for this powerful guideline, produced together with LGBT Jews, he writes: “As challenging as the task might be, and it is exceptionally challenging, I believe that the failure to address it at all amounts to an abrogation of our responsibility to the Almighty and to our children”.

In a week that has seen a brilliant and promising 19-year-old South African Jewish student commit suicide because of a struggle with depression and sexual identity, I would ask Israel Folau to carefully consider just what his words do to young people struggling with their sexual identity.

As a very public figure and role model, he bears more than a rugby ball in his hands, he carries on his shoulders a moral responsibility to not only speak out in the name of his religion, but also to act in the rich compassionate spirit of that religion.