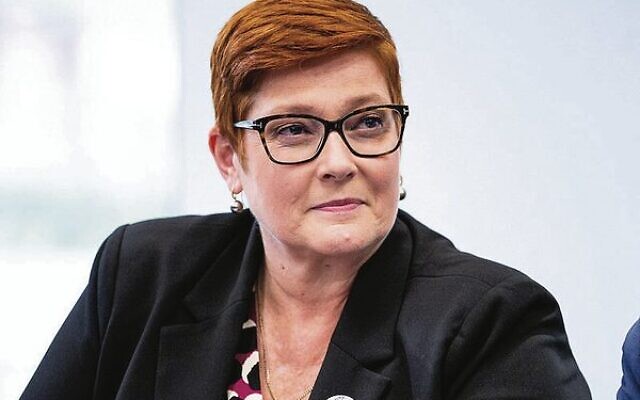 IN a spirited argument for re-electing key Liberal MPs Tim Wilson in Goldstein and Dave Sharma in Wentworth – strong advocates for Israel’s rights – Foreign Minister Marise Payne has stated, “I would be very concerned to see the absence of their voices in a government.”

Making a stop on her election campaign trail at Leibler Yavneh College in Melbourne last week, the Foreign Minister condemned so-called “teal” independents, saying, “It’s not lost on me the candidates in my [government’s] team against whom these campaigns are targeted.”

Payne visited the college for a meet-and-greet with its leadership team and with Jewish community leaders and local MPs – as well as Liberal challenger for Macnamara Colleen Harkin – in attendance. She was also given a tour of the school’s facilities.

Addressing the gathering, Payne reiterated her government’s continued close relationship with the Israeli government and PM Naftali Bennett’s coalition, and Australia’s support for the Abraham Accords. She noted her recent conversation with her counterpart, Israel’s Foreign Minister Yair Lapid, who had described his enthusiasm for revisiting Australia.

“We’ve worked very hard across different iterations of governments in Israel to make sure the relationship is strong,” she assured.

She lamented “the unreasonable degree of scrutiny or focus [on Israel] than any other state … it speaks for itself, in terms of the inappropriateness of that approach … it ignores the facts and it also pretends to cloak antisemitism behind the human rights record”.

Payne said Canberra has also worked to further its defence engagement with Israel.

Responding to questions from Jewish community leaders, she voiced her deep concern about Iran and said Australia is “watching very closely” as the US negotiates a possible re-entry into the Iran nuclear agreement.